Vinyls from the Radiant and the Dire Enter the Battlefield 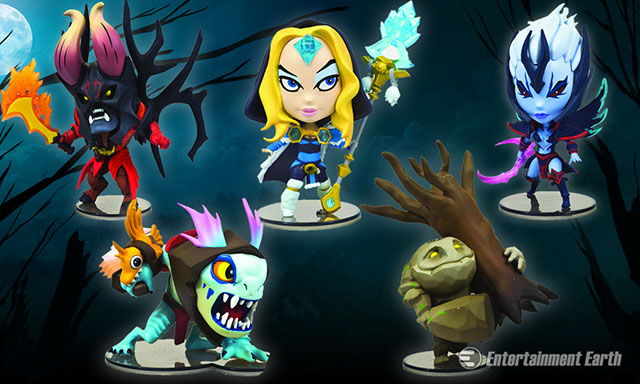 Are you ready to fight for victory and destroy the Ancient? Mighty Fine presents DotA 2 Vinyl Figures so you can have your very own Hero that comes with a special feature!

These colorful figures stand 2 1/2-inches tall on round bases. There are 5 total, each of a different Hero from the popular online game, DotA 2.

The Vengeful Spirit, dark and powerful, is an agility Hero. She’ll even cause damage to her opponents after she’s slain with her Vengeance Aura.

With a flaming sword and a terrifying presence, Doom, a strength Hero, will make any enemy cower in his presence. He is a Fallen One and can move freely between the seven dark dominions.

Slark is a sea-bred agility Hero who successfully escaped from the Dark Reef. He is vicious, ruthless, and largely keeps to himself.

Rylai the Crystal Maiden was banished by her parents to Icewrack where she studied under an Ice Wizard. As an intelligence Hero who has mastered the Frozen Arts, she is not one to be underestimated.

Last but not least is Tiny, a strength Hero. He is a Stone Giant who’s driven by curiosity about where he came from and grows in weight and size as he travels.

Each figure comes with a digital unlock card to use in the game as well!

Join the battle and enhance your experience with the DotA 2 Vinyl Figures, currently available for pre-order at Entertainment Earth with an expected arrival of August 2015.