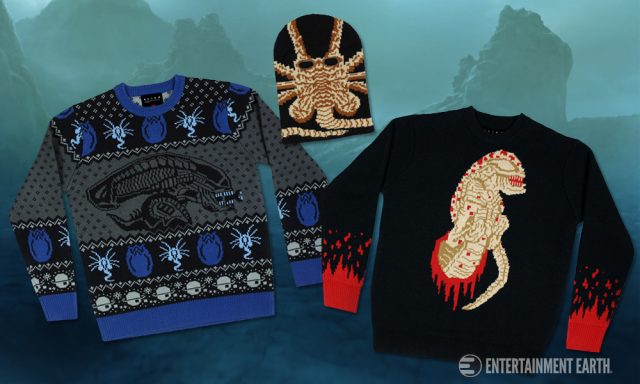 Ah, yes, the warm summer season (at least for those of us in the northern hemisphere), no need to worry about winter apparel yet… but think again!

Because you only have two days to order Mondo’s fantastic Alien apparel, including a ski mask and two sweaters.

You might scare the young’uns singing their winter carols in the Facehugger ski mask, but who worries about that when you look as awesome as you do in it? Made from 100% acrylic fiber, it’s knitted and comfy to keep your face, ears, and head nice and toasty when those lower temperatures arrive. Plus it’s a great conversation starter or, conversely, a great way to keep people away if that’s more what you’re feeling.

But what’s the winter season without some “ugly sweaters?”

Except these sweaters aren’t ugly (well, that might be a matter of taste), they’re straight up fantastic! One features the chestburster, stark against a black background, with bloodied sleeve ends, while the other is more in the traditional style of an “ugly sweater,” showcasing the Xenomorph in the center and other imagery from the film throughout.

They’re both made of acrylic fiber and knitted, so they act both as warmers and fashion statements.

All of these items are set to arrive in October, perfect timing for winter, so pre-order them at Entertainment Earth now, where the sweaters come with free shipping. And remember: you only have until Friday, May 13, to get your orders in!