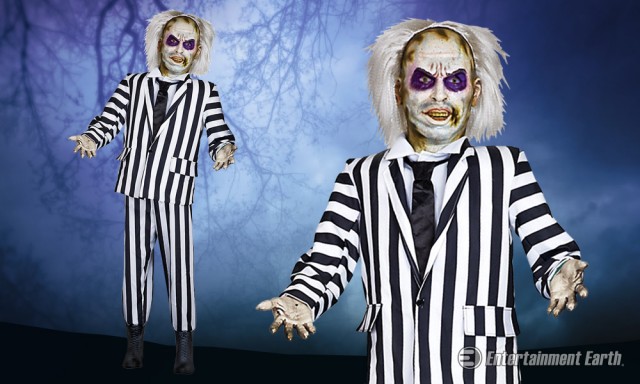 Fans of Tim Burton’s Beetlejuice film know that when you say his name three times, he will appear – so we called, and he arrived! Don’t miss out on the chance to have your own villain in the form of a Beetlejuice Life-Sized Animated Statue by Morbid Enterprises.

The infamous bio-exorcist ghostess with the mostess is back and bigger than ever! Beetlejuice is ready to scare, wearing his trademark striped suit and tie, topped off with an out-of-control hairstyle.

This 6-foot tall, life-size statue features light-up red eyes and multiple audio soundtracks exposing his rude and crude personality. But, that’s not all! Beetlejuice is also sound and motion activated allowing his body to sway from side to side, turning this statue into a present beloved by all. Beetlejuice is great for entertaining your friends and family, or simply scaring off unwanted house guests.

Now you have the opportunity to create a good scare with this Life-Size Beetlejuice Animated Statue, order today at Entertainment Earth with Free Shipping!