The Most Outrageous My Little Pony Toys Ever Made 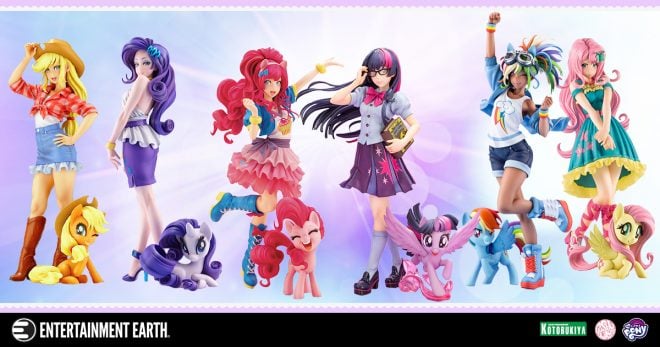 My Little Pony flash drives are strange, Equestria Girls dolls are a little weird, and Rubik’s Crew figures are totally crazy, but if we’re talking about over-the-top outrageous, then yes, the Bishoujo statues are definitely taking the cake.

My Little Pony fans are always looking for the next thing to add to their collection, and Hasbro hasn’t disappointed them yet. But the partnership between Hasbro and Kotobukiya is taking MLP toys to the next level. These statues push the Equestria Girls look one step further by not only blending it with Koto’s signature Bishoujo line but featuring both a human and a pony version of your favorite Friendship is Magic characters. They’re DeviantArt fanart come to life, and we’re here for it!

The statues will be produced in the same anime style as the rest of the Bishoujo statues and will be beautifully rendered by illustrator Shunya Yamashita. Each will be sculpted with great detail and specially painted to showcase the Pony’s unique style.

More Ponies to Show off Your MLP Pride

Koto is showcasing the Mane 6 – Twilight Sparkle, Applejack, Rainbow Dash, Rarity, Fluttershy, and Pinkie Pie – and they’re producing a Sunset Shimmer statue as well. It’s interesting that the Bishoujo line will continue outside the core characters and feature the mane (get it?) antagonist of the Equestria Girls franchise. Based on the silhouette, it looks like Sunset Shimmer will have a rocking outfit – big boots, a skirt, and a leather jacket – similar to hers in Equestria Girls. Hopefully, this means we’ll see even more supporting characters in Bishoujo statue form.

What do you think? What are the most outrageous My Little Pony toys ever made? Let us know in the comments.