Most people don’t remember playing the original Street Fighter arcade game. You could play only as Ryu or Ken and there were giant rubber buttons that you could mash, the harder the better. And if you mashed that button just right, the most surprising thing in an arcade game since the Power Pellet happened: your fighter produced a fireball in the middle of a fist fight.

Everyone remembers Street Fighter II, and everyone spent any and all lose quarters mastering any number of moves by a myriad of fighters from across the globe. But even among the Sonic Boom, Yoga Flame, and Blanca’s electric attacks, it was the Hadouken that ruled them all. Now you can light your room by the glow of Ryu’s attack with this Street Fighter Ryu Hadoken LED Statue or this Street Fighter Evil Ryu Hadoken LED Statue! Each statue is about 10-inches tall and they both include variable settings for the way the fireball glows; it can pulse fast or slow, or be set to a constant glow.

The only choice you have to make is which embodiment of Ryu will you choose? There is classic Ryu, wearing his traditional white gi, or you can choose Evil Ryu, wearing much darker colors with eyes filled with rage. Both statues are severely intense. Ryu is ripped in this 3-D rendering of the classic Street Fighter bombastic style. His gi is being blown back by the force of the Hadouken being created in front of him.

These high quality statues help you relive the last golden age of arcade gaming. They look great, both day and night. You can pre-order yours at Entertainment Earth! 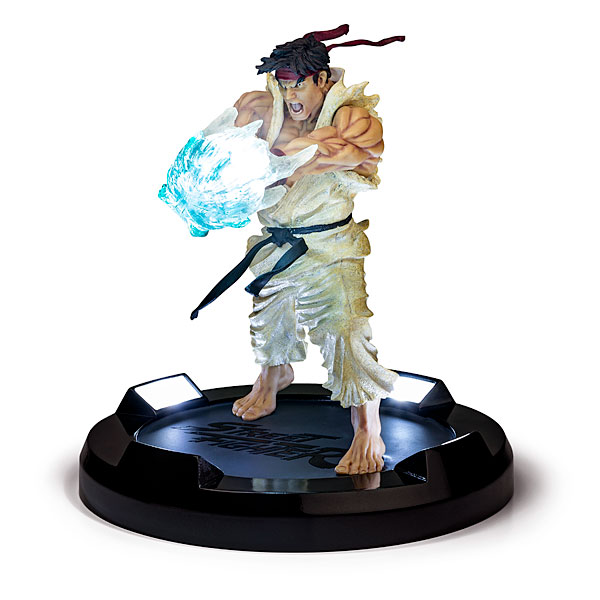