Friendship Is Magic and so Are These Pony’s! 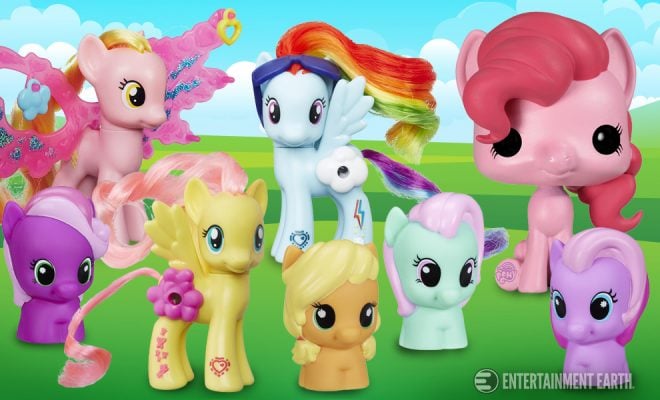 There are few toy franchises that have stood the test of time, re-imaginings, and continue to get bigger and better. Since the early 1980s, one of these iconic toy lines has been My Little Pony. Today in 1983, My Little Pony was patented – revolutionizing the concept of “girls” toys.

I was born in 1992, on the tail-end of the 80’s My Little Pony craze. That was the year My Little Pony’s original line stopped being sold in the U.S., and it would be five years before the next line launched (and with less success than its predecessor, it was discontinued after two years in the U.S.).

What started in 1981 was a simple 10-inch tall pony figure from Hasbro named My Pretty Pony. It could wiggle its ears, swish its tail, and wink one eye. This pony looked far more like a “real” horse – nothing like the brightly colored ponies that the line is now recognized for.

Over the years (and through four “Generations,” as collectors call the different waves and styles of pony’s), the pony figures have underwent several “makeovers.” There were Rainbow Ponies, So-Soft Ponies (covered in flocking), and Twinkle-Eyed Ponies that had rhinestones for eyes – and those were just pony’s released in the 1980’s!

The MLP Friendship is Magic Pinkie Pie Pop! Vinyl Figure is a perfect example of this almost chibi-style My Little Pony is now known for. With exaggerated features (that big head! Those big eyes!) and bright shades of pink, this Pop! Vinyl is a must-have for any pony fan.

Can’t pick a favorite pony? You won’t have to with the My Little Pony Explore Equestria Magical Figures Wave 1 Case. Perfect for hardcore collectors or as presents for fans around the holidays, this set lets you take home six individually packaged ponies, including favorites like Rainbow Dash and Pinkie Pie.

Take home a brood of pony pal’s with the My Little Pony Playskool Friends Mini Figure Collector Pack! These seven adorably chunky pony figures are perfect for toddlers to play or adults to display.

Looking for a pony that has a little something special? This My Little Pony Cutie Mark Magic Winged Ponies Wave 1 Set is it. Not only do these pony’s have translucent wings, but they’re adorned with charms and super-long hair for even more Friendship is Magic fun than ever before!

Possibly the most iconic pony in recent years has become Rainbow Dash. Take her wherever you go with the My Little Pony Friendship is Magic Rainbow Dash Tin Tote. Unlike normal square tin totes, this one has been shaped to resemble the adorable head and face of Rainbow Dash.

The resurgence in amazing, high quality My Little Pony merchandise can really be attributed to the popularity of My Little Pony: Friendship is Magic, which debuted in 2010.

Since its incarnation, My Little Pony has been prevalent in movies and television, which is a truly brilliant piece of marketing. The toy debuted as a stand-alone character, and parlayed itself into a community of characters that fans became attached to. There were 80’s made-for-TV movies, a TV series that premiered on Disney Channel in 1992, a virtual pet computer game, direct-to-video animated films and shorts, games made for Game Boy Advance and Nintendo DS, comic books, and possibly most famous of all: the My Little Pony: Friendship is Magic television show.

While Generation 3 (or “G3”) of the My Little Pony figures had gone back to the original style of the first lines of pony’s, G4 went in the complete opposite direction. They were redesigned by Lauren Faust and looked more anime-inspired: large eyes, smaller muzzles, and proportionally small bodies for their large heads. Faust wanted to target young girls and their parents, but she and Hasbro were in for a surprise when the show became popular among many adult fans as well, who cited appreciation for the characters, stories, and animation style.

Fauster had said she wanted to bring quality to girls cartoons, not only in the animation, but in the storytelling. “[The girl characters] are so pretty, polite, and perfect; there is no legitimate conflict and nothing exciting ever happens. In short, animated shows for little girls come across as boring. Stupid. Lame.” Not anymore! My Little Pony: Friendship is Magic filled the void in girls cartoons – she gave a generation of girls relatable characters with captivating stories and real conflict… They just happened to be pony’s.

Now, the My Little Pony franchise and fandom is bigger than ever. It’s a pony world, we’re just living in it. Check out all the bright products that go along with this world – plenty are in stock now!

» See All My Little Pony Items