When it comes to high quality and reasonably priced collectibles, NECA is second to none. They always have the best in figures and replica items. In the next few months, they have several products coming that are irresistible to even the most casual of collectors!

Jumping directly off the screen and into your hands is this Raphael figure from the 1990 Teenage Mutant Ninja Turtles movie. Fully disguised in his trademark trench coat and hat, Ralph is ready to go undercover to take down the Foot. The coat, hat, and backpack are all removable, and he comes with a baseball bat, pizza slice, sai accessories and interchangeable hands. He stands 16 1/2 inches tall and features 30 points of articulation. This figure is perfection, dude!

Sticking with our favorite heroes in a half shell, this replica from the same 90’s TMNT film puts the M in TMNT. The four turtles and one rat just trying to find their way in the hustle and bustle of the NYC sewer system were contaminated with this TCRI ooze which made them grow. This prop replica glows with the push of a button through the crack in the side and it comes with ooze (Warning: Do not attempt to create your own team of crime fighting reptile teenagers). The Mutagen Canister Prop Replica measures 13 inches long and batteries are included! 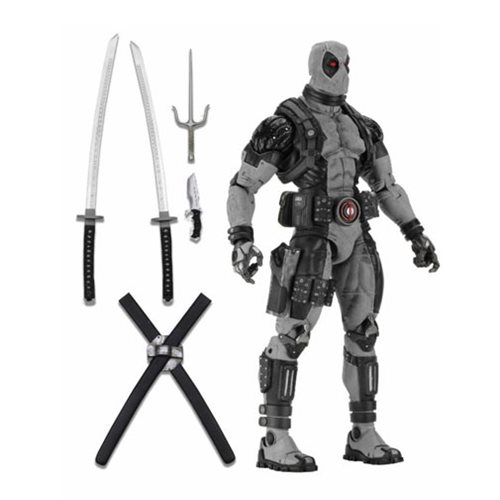 While Deadpool typically works alone, from time to time he does enjoy a good team-up. In fact, while a member of the X-Force he changed from his popular red and black costume to a more stealthy gray and black ensemble featured in this action figure. The insanely detailed figure of the Merc with a Mouth is 18 inches tall, features over 30 points of articulation to recreate his most maximum of effort poses. Deadpool also comes with katanas, sai, machine guns, pistol and knife accessories as well interchangeable hands to hold this arsenal of weapons.

From your nightmares, Freddy attacks! Thankfully, you can capture him in figure form while you’re awake…just don’t drift off into dreamland. This version of Freddy is from Freddy’s Revenge and includes nightmarishly accurate detailing. Freddy comes with three interchangeable heads, 2 dogs, a gloved hand, a monster hand, and removable signature hat. You can even recreate the memorable pool scene with an attachable fire effect accessory.

The sequel to the cult classic Blade Runner film isn’t in theaters yet, but when it arrives it’s sure to be a hit. Taken straight from the new film is this die-cast replica of the Spinner. This 6-inch die-cast metal and the plastic car is carefully hand painted, features rolling wheels and measures 6 inches long. Perfect for the Hot Wheels enthusiast or the Blade Runner fan in your life.

While this is just a taste of what NECA has to offer you on a daily basis, these upcoming items are must haves for any self-respecting collector! Get out there and pre-order yours now before Deadpool steals them all for himself!