Are You Ready to Unleash Shin Godzilla?

Since 1954 the kaiju known as Godzilla has been taking the world by storm and has earned his place as a pop culture icon. Over 30 feature films have been created featuring the King of the Monsters with the latest being Shin Godzilla (also known as Godzilla Resurgence.) The new film was released to critical acclaim in Japan and became the highest-grossing Japanese-produced Godzilla film in the franchise. Straight from the film comes the Shin Godzilla 12-Inch Head to Tail Action Figure from NECA Toys!

NECA has a long history of producing amazing Godzilla action figures and this new addition will not let you down! The figure features Shin Godzilla in the monster’s fourth form which highly resembles the original ShodaiGoji (Godzilla suit design.) It stands 6-inches tall and measures 12-inches long from head to tail. It has nearly 30 points of articulation including a fully articulated tail. This design is highly detailed featuring his dark reptilian skin with exposed red muscles and scarring along his scutes, neck, and body. His muscles are mostly exposed along the dorsal plates and the tip of his tail which leaves him ready to shoot out those destructive atomic beams! His face features the wide snake-like jaw filled to the brim with jagged teeth.

Make sure you pre-order this Shin Godzilla figure now and we promise you won’t need vats of the coagulating agent to keep this guy under control! 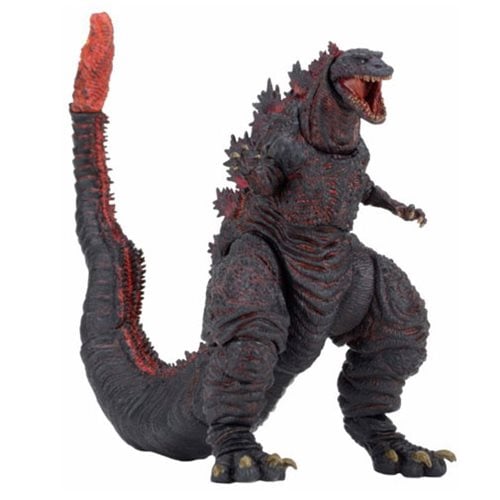