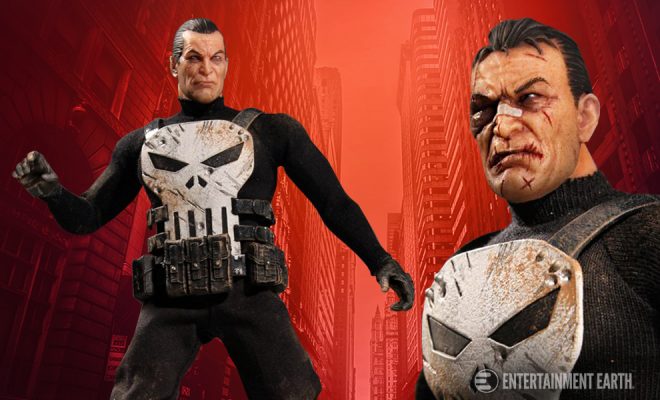 Frank Castle is one damaged man. When a mob shootout results in his family’s death, Castle vows revenge. Lucky from him, he is a military-trained killing machine. If there is one dude in this world who is prepared to rain Hell down upon those who have wronged him, it is Frank Castle, the Punisher.

This Punisher One:12 Collective Action Figure made by Mezco Toyz captures the intensity and violence of the classic comic book series. As the Punisher, Frank Castle has become the self-appointed judge, jury, and executioner of anyone he sees fit, and there is no action figure more perfectly suited for the job than this one.

This figure has an amazing 32 points of articulation. Even more impressive than that, it comes with a load of accessories, including three heads, multiple firsts and hands, armored skull load bearing vest, and a weapons arsenal that is beyond reproach: combat knife, knife sheath, 9mm handgun, machine gun (with spare clip), grenade launcher (six grenades included), and a sub-machine gun (also with an extra clip). No, you probably shouldn’t mess with this dude.

This figure was made with the collector in mind. Both the figure and the accessories are made with meticulous detail and realism. The display base has a posing post, so when combined with the outstanding articulation and interchangeable parts, any scene from the comics can come to life in your display. At One:12 scale, The Punisher stands about 6-inches tall, but his presence is larger than life.

This figure isn’t available yet, but if it is anything like Mezco Toyz’s other figures, you already know that it will be well worth the wait. You can skip the anxiety and pre-order your figure with free shipping now from Entertainment Earth! But be quick, because you need to get your orders in by Monday, May 30!