If you’re a fan of Stephen Amell as Green Arrow in the popular CW TV series, Arrow, mark October 2017 on your calendar! That’s when Kotobukiya releases its new Arrow TV Series Green Arrow ArtFX+ Statue. Designed and sculpted in 1:10 scale and standing 7 1/4-inches tall, this is Oliver Queen in the new uniform he started wearing in season 4. Fans of the show will remember that, for the first three seasons he was known as The Hood and The Arrow.  But after finally defeating Ra’s Al Ghul at the end of season three, Oliver had decided to retire. That didn’t last for long, of course, and, in season four, when he returned to Starling City to fight crime, he started wearing the new and improved uniform and took on the name Green Arrow.  While similar to the former uniform in many ways, the leather ensemble featured short sleeves instead of the long sleeves from before while presenting the look of protective armor.

Alternate sets of arms will allow you to display the super-cool hooded vigilante loading his bow with an arrow or simply holding the bow down by his side. A quiver on his back filled with additional arrows completes Green Arrow’s dynamic look, while magnets placed in the feet assures a solid connection to the statue’s base.

Collectors of DC Comics superheroes in general and CW action heroes in particular will love this new figure. But for the collector of Green Arrow through the years, from his 1941 debut in DC Comics’ More Fun Comics, issue #43, to his tougher, grittier look in the 1960s, 1970s, and into the 21st Century, and finally on the CW TV series, now in its fifth season, this new creation from Kotobukiya is the perfect addition to any fan’s collection. 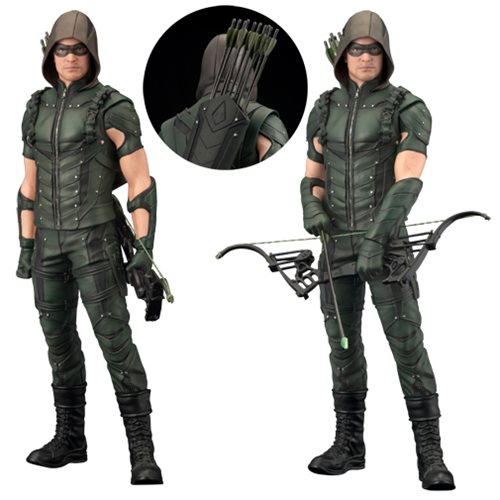 Collectibles Statues
Related ItemsArrowArtFX+CWTVDCTVGreen ArrowKotobukiyaStatue
← Previous Story Celebrate Harley Quinn’s 25th with a Present from Her Puddin’
Next Story → Pop the Claws One Last Time with This One:12 Collective Action Figure