New and In Stock: The Big Bang Theory BAZINGA!™ Umbrellas

“Rain… another great equalizer. Falling on the head of the brilliant and the unremarkable alike.” – Dr. Sheldon Cooper

It’s true: Even the great Sheldon Cooper has need of a fine umbrella like this. The brilliantly designed The Big Bang Theory BAZINGA!™ Tri-Fold Umbrella from Bif Bang Pow! measures a full 36-inches across when open, yet it folds up neatly to a mere 9-inches long – short enough to drop in your purse or briefcase! Based on the hilarious TV sitcom The Big Bang Theory, this multicolored rain deflector features the famed BAZINGA!™ logo on 4 of the 8 black and red panels of the canopy… so no one can question where your entertainment loyalties lie! Made of 100% polyester, with a metal rod and plastic handle, the BAZINGA!™ Umbrella comes in a matching polyester case that also displays the logo.

Neither pouring rain nor torrid sun can keep you indoors when you have you’re The Big Bang Theory BAZINGA!™ Black Umbrella with Red Light-Up Handle in hand. It also had a flashlight on the bottom of the handle! The canopy is black with a bright red, white, and yellow BAZINGA!™. When open, it measures 40-inches across. The umbrella measures 39 1/2-inches from the tippy top to the base of the handle, which is also black. Best of all, the rod lights up with a red glow! That ought to put some BAZINGA!™ in your step! Requires 3 “AAA” batteries, not included. Ages 14 and up.

In The Big Bang Theory, Leonard and Sheldon are brilliant physicists – geniuses in the laboratory, but socially challenged in the real world. Enter beautiful, street-smart neighbor, Penny who aims to teach them a thing or two about life. Despite their on-again, off-again relationship in the past, Leonard found true love with fiancé, Penny. Even Sheldon has found a female companion – entering into a “Relationship Agreement” with neurobiologist Amy Farrah Fowler. In their free time, Leonard and Sheldon continue to enjoy frequent trips to the comic book store and fantasy role-playing games with their ever-expanding universe of friends, including fellow scientists Raj and Howard, and Howard’s adorable microbiologist wife, Bernadette. 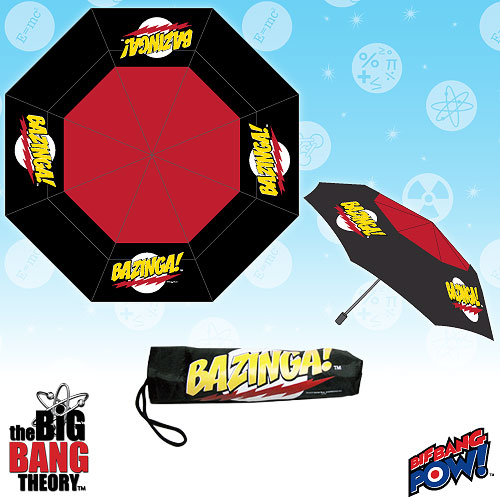