The universe’s greatest bounty hunter gets the Figma treatment with this awesome articulated action figure. With impeccable details, tons of posabilty, and a handful of extras features to boot, this Takayuki Takeya release is easily the quintessential Predator figure. Now if we can only get a mud-covered Arnold this good to go with it…

Straight out of Tommy’s dreams and on to your toy shelf comes this frightening Friday the 13th: Dream Sequence Jason figure. With 25 points of articulation, four interchangeable heads, and tons of gruesome and realistic details, he’s easily one of the coolest Jason figures ever made. He also comes with his own display-friendly box. Be afraid. Be very afraid. 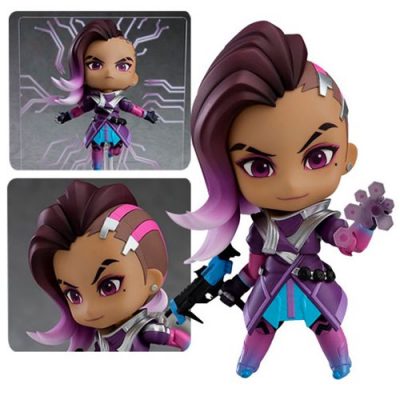 It’s been a good year for Nendoroids: with dozens of new releases every month, the cute Chibi company is expanding and branching out into vast new worlds. Just check out the new Overwatch Sombra and Metal Gear Solid figures for proof.

Sombra, with her iconic hairstyle and decked out Overwatch outfit, is an instant eye-catcher, while Snake sports his classic rugged features while somehow still looking adorable. He even comes with his own cardboard box to help him hide from baddies.

Marvel’s X-Men Wolverine statue oozes all kinds of animated awesomeness. Based on his iconic 90s cartoon appearance, this latest Gentle Giant release was digitally sculpted and comes posed in a fit of rage. Perhaps he’s prepping for his patented Berserker Attack?  Each statue is hand painted and includes its own limited edition certificate of authenticity.

We also got two more Dragon Ball figures in this week. First, the epic Super Saiyan Gotenks comes with transparent parts to help make his Super Ghost and Galactic Donut attacks look extra realistic. He also includes extra hands, different facial expressions, and even comes with his own stand. He may look cute, but you better not test his strength.

And there’s also the Dragon Ball Z Super Saiyan Broly Statue. This thing is epic – just look at how perfectly sculpted and detailed it is. Measuring roughly 12 3/5-inches tall, this statue is pretty imposing. It also comes with various effects and diorama parts to help it stand out (as if it needed any help).