Lots of cool collectible news this week! With upcoming releases featuring Wonder Woman, Batgirl, Poison Ivy, and more, September’s been a good month for DC fans. We also just got the latest Diamond Select products for this month, so be sure to check those items out!

Modeled after the latest incarnation of the world’s strongest woman, this 7-inch Wonder Woman vinyl statue sports an incredible likeness and comes complete with her trademark sword and armor. Perched atop a dazzling Wonder Woman logo, this figure is ready for battle.

DC Collectibles’ latest line of combinable figures features none other than the iconic bat family. Featuring 5 individual figures, each statue is able to combine to create one heck of an amazing diorama. As the second piece in the set, this Batgirl Multi-Part Statue comes strapping her grapnel gun and features all kinds of cool little details. Ready to set off into the night, each statue is limited to roughly 5,000 pieces. 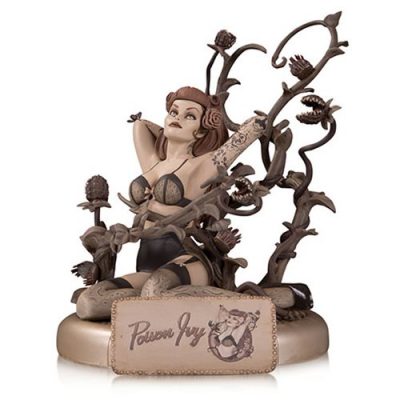 Don’t let her looks fool you: Poison Ivy is as dangerous as they come. This sepia-style statue features stunning details and stands roughly 10 2/3-inches tall. As part of the Bombshells limited-edition series, the colors on this statue are meant to invoke a certain sense of nostalgia. It’s definitely a looker.

What’s that? You want to see more Batgirl products? You’re in luck! From one of the co-creators of the iconic (and awesome) 90s Batman: The Animated Series comes this epic-looking black-and-white Batgirl figure. With a playful style and uber extravagant pose, this polyresin statue stands 7-inches tall.

Leave it to the Red Death to spoil a perfectly good female-centered listicle. Just joking – we love this guy. Based on the Dark Nights: Metal series, this awesome Red Death statue features a sturdy PVC build and comes pumped and primed for action. With impeccable paint applications and tons of tiny bat-shaped speed lightning accents, Death here stands 10-inches tall.