First Official Look at Terminator: Genisys on the Cover of EW 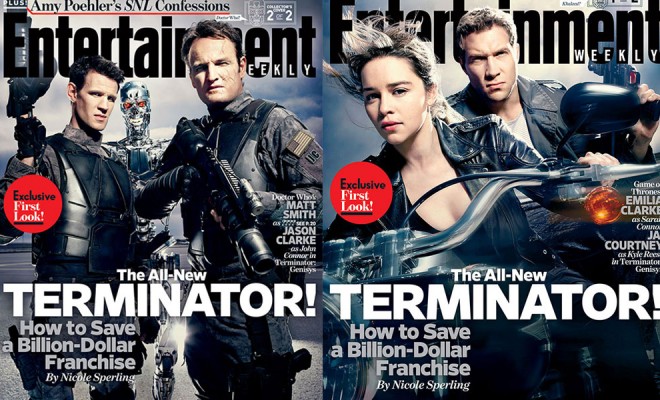 Entertainment Weekly has just released two new covers for an upcoming issue, and boy are we excited! They not only feature our first official look at the upcoming Terminator: Genisys, but hint at what to expect from the film. The outlet confirms rumors that the film will feature moments from the first two films in the franchise, through a new lens.

“It’s like going on tour again if you’re Pink Floyd – the audience always wants to hear some of the old songs,” said former Doctor Who Matt Smith. “There are enough nods to the past that people will feel satisfied.”

Though we don’t know who Smith will play in the film, it is noted that he plays a “close ally” of John Connor.

The film’s plot is different in how Sarah Connor, played by Emilia Clarke, will be portrayed. According to EW, Sarah is raised by Arnold Schwarzenegger’s Terminator, whom she calls “Pops.” This older T-800 is “programmed to guard rather than to kill,” and this has possibly rubbed off on Sarah as she is “great with a sniper rifle but not so skilled at the nuances of human emotion.”

“Since she was 9 years old, she has been told everything that was supposed to happen,” producer David Ellison says. “But Sarah fundamentally rejects that destiny. She says, ‘That’s not what I want to do.’ It’s her decision that drives the story in a very different direction.”