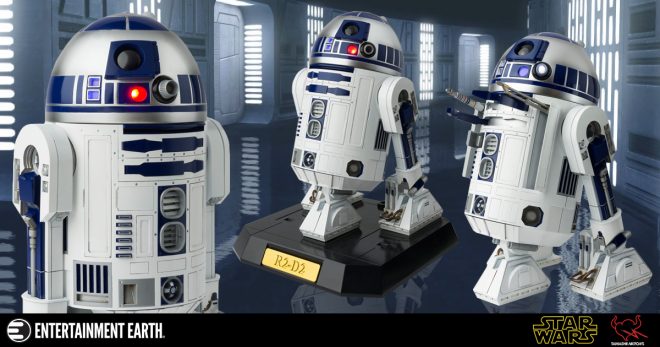 When Star Wars: The Force Awakens hit theaters in 2015, little roly-poly droid BB-8 bounced and beeped his way into moviegoers’ hearts. But the new guy’s really rolling the trail blazed by R2-D2 back in 1977.

From the second he shoved a reluctant C-3PO into an escape pod near the beginning of the original Star Wars, R2 showed he had the guts (well, the gears) of a hero. His devotion to the Rebel cause, his determination to complete his critical mission for Princess Leia, and his refusal to put up with too much guff from Threepio are still winning him fans, four decades later.

The plastic and diecast metal artisans at Chogokin have crafted a meticulously detailed model kit to honor Star Wars’ most famous astromech. Yes, assembly is required – but what a payoff! R2 stands almost 7 inches tall, and is excruciatingly screen-accurate, right down to his illuminated indicators and holoprojector (courtesy of 8 LEDs) and the manipulator arms inside his front hatches.

You can pose R2 in bipedal or tripedal mode, and the display stand with nameplate adds the perfect distinguishing touch, because if any droid deserves to be on a pedestal, it’s R2!

If you’re a long-time Star Wars fan, then – just as Luke Skywalker said – this little droid and you have been through a lot together. Commemorate the adventures and celebrate the fun by making a place for the R2-D2 Chogokin x 12 Perfect Model Kit in the center of your Star Wars collection.

(And keep those disgusting Jawa creatures away from him!)