You Won’t Believe Our 12 Favorite One:12 Collective Action Figures

Unless you’ve been living under a rock, in a remote cave, in the Arctic, or just aren’t a 1/12th scale figure collector, you’ve heard of the Mezco Toyz One:12 Collective action figures line. Starting in 2015, Mezco has created these hyper articulated figures with real fabric clothing and more accessories than you’ll know what to do, which are easily one of the hottest things to happen to the toy industry in the past 5 years. As a fan and collector of this line, here are my 12 favorite One:12 Collective picks (in no particular order).

Standing at about 8-inches tall, the real appeal of this figure is the sheer weight. When you pick it up, it feels like it’s made from whatever rocky substance makes up Darkseid. This figure seamlessly melds multiple materials – polystone, metal, cloth, and plastic – setting Darkseid above the rest. Great detail went into every aspect, from his outstanding 4 magnetically interchangeable faceplates to the gauntlets and boots. Add in the Mother Box accessory (which also sticks magnetically to his belt), a light-up feature for his eyes, all packaged in a metal tin, and Darkseid is a mainstay on the shelf.

This alien farm boy is a staple for any toy collection, as long as he is done right. Thankful, Mezco knows this and nailed Superman. From the detailed facial sculpts (heroic jawline and optional heat vision head) to the magnet bullet blasts and chain, this action figure includes everything you need to truly represent the Man of Steel. He even features a special attachment for his stand that allows you to pose his cape, which is far superior to a breakable wire, so have no fear about getting him into any pose, flying or otherwise. With cool accessories like kryptonite and the bottle City of Kandor, Supes has earned his place in the top 12.

“I am the law!” This is the first (and perhaps only) One:12 figure to come with a vehicle and it’s worth every Mega City 1 credit. The vibrant colors and sculpting of Dredd’s uniform are spot on and the extra hands and accessories bring even more attitude to this attitude-heavy character. However, it’s the bike that put it on this list. Every mechanical detail is visible, with great texturing and extras adding to the overall realistic look. It’s another heavy piece, thanks in part to the real rubber tires, so it feels like your getting more for your money than just another toy motorcycle. The sound and light options are a plus, highlighting even more detail (the onboard computer screen is awesome), and are sure to wow even non-fans when you power this baby up.

The first thing you’ll love about this Captain America figure is its packaging – circular “shield” tin with a lenticular Vita-Ray chamber encasing the figure. Being able to watch a 90-pound weakling transform into super-soldier will put a huge smile across anyone’s face and we’re not even talking about the figure yet. While there is nothing wrong with the modern Captain America Mezco puts out, nothing beats the classic, wing-headed, “look at my real ears” Cap. With a chainmail look to the armor and the retro coloring, plus every other accessory and perk included with the modern version, this figure embodies every aspect of the American dream.

There are no heroes without villains. Recreating the original green jumpsuit look from 1941, the Red Skull’s piercing gaze would leave a lesser man crying into his war rations. Sculpting, paint, and articulation are top-notch, even for Mezco, allowing the figure to stand up to even the closest of scrutiny. The outfit is superbly tailored and the red Hydra armband really pops against the green. Accessories include two heads, 3 sets of hands, an era-accurate handgun, and the comic version of the Cosmic Cube! While cool, these all come with the mainline version as well, so you really need to be into the chest harness carrying the fuel tanks and the attached flame thrower/cannon. Die American Pig! 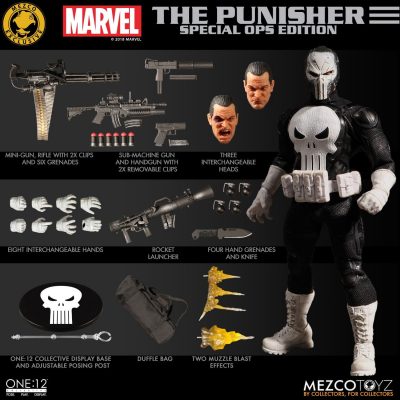 Whether you’re a huge fan of Punisher or think he’s a one-trick pony, there’s no denying that his look is iconic. Mezco has done roughly 4 versions of Frank Castle before this one. This figure still has the white gloves, boots, and belt you love from the classic Punisher costume, and the texture to the skull and bodysuit really embraces the tactical look for this version. Then, there are the accessories, so many accessories – 3 different heads, including a masked one not included in any other version, which gives you the opportunity to change his look regularly. The 3 sets of hands and more guns and effects than you can shake a stick at. Don’t worry about losing any because it can all fit into the large duffle bag. “Si vis Pacem, Para Bellum – If you want peace, prepare for war.”

Spider-Man has had many looks, but none of those take you back to your childhood more than the simple pre-Venom black suit. Such a dramatic change from his classic red and blue, the sleekness of the black suit ushered in a new era for Peter Parker. This figure only comes with the one head, but the raised white eyes hint at a fierceness bubbling below the surface. Some people argue that this one is light on the accessories, but Ia little goes a long way. The 3 sets of hands and 4 different web blasts mixed with high articulation and the nonrestrictive suit, you can convey every Spidey pose you want.

Like everyone else, Mezco has jumped on board the Wolverine train and done many different versions, and while they’re all Mezco quality, Ronin Wolverine has helped changed a lot of people’s minds about the Ol’ Canucklehead. This figure is gorgeous from top to bottom. Two heads, one Samurai style, and one more Wolverine-like, let you play out either your Kurosawa fantasy or his doomed marriage into Clan Yashida. The paint is amazing, nailing both skin tone and body hair, and the outfit is so well done. Throw the pair of Katana swords into his belt and wrap the wired red scarf around his neck and he’s ready to wander the wilds, looking for trouble.

Impeccable. Seriously. For a figure that is based on Mezco’s mascot, this figure is even amazing when compared to every other One:12 release. The suit fits perfectly, each piece in scale and hanging naturally. The sneakers (sporting the Mezco logo) look so real you’ll do a double-take. The overcoat adds a super-spy feel that can’t be beaten. Throw in 4 different heads, 6 pairs of hands (including a middle finger hand), a boom box/weapon storage, sticker sheets, backpack, and enough weapons to choke a cockroach. If you’ve never collected One:12’s and don’t go in for all the nerdy stuff, this is the figure that will make you a life long fan of the line.

“I yam what I yam, and that’s all what I yam.” If you’re a Popeye fan, then you know the market has been quite dry for this character. Well have no fear, Mezco has you covered! A stylized take on the classic Fleischer cartoon version, Mezco added in a real-world take that is both fascinating and terrifying. Don’t be surprised if this guy walks around on his own when you leave the room, beating up other toys that try to eat his spinach. The paint job on the skin really brings out all the little details, from the wrinkles and lines in the face to the aged tattoos on his forearms. 3 hats (2 of which have magnets to make the fit perfect) really help affect different looks for the figure, as does the pea coat, which includes a wire in the collar. Extra pipes are included (both smoking and not) are included just in case you lose one and of course, we have the spinach, both unopened and crushed. Including a unique character like this in the line it just another reason Mezco rocks.

Second to Batman, no character is more ingrained into the series than Commissioner James Gordon. It’s a pretty straightforward comic book rendition of the character, which, let’s be honest, is what everyone wants. The two heads give you a chance to have both young and old Gordon, going beyond just paint, but also adding in wrinkles. With options ranging from his classic trench coat to a GCPD tactical vest, as well as all the cop accouterments (walkie, gun, badge) this is a great figure all by himself. But he doesn’t come alone! Standing right next to him is another mainstay in the franchise, the Bat-signal! The detail on this thing is truly mind-boggling, going so far as to have a working lever that actually turns on the signal. The bat symbol it shows in the “sky” looks great and if your interested, there is even a rooftop cardboard diorama to go with it. Fricken classy!

One of the more recent releases, this is a Cyclops variant on the mainline Jim Lee style costume. A lot of fans were thrilled when the original costume look was announced. He includes all the accessories of the mainline (standard and smoking visor, 2 blasting effect visors, and 3 sets of hands), but also has 3 heads instead of just 2, giving us the mask off, sunglasses version. And yes, the sunglasses are removable! Of course, this figure has a light-up feature and there really is nothing cooler than having Scott, glasses ripped from his face, pointing his two glowing eyes right at you.

The views expressed in this article are solely those of the writer and do not necessarily reflect the views of Entertainment Earth, Inc. its owners, officers, employees, affiliates, subsidiaries, partners, vendors, customers or licensors.

Action Figures Collectibles
Related ItemsAction FiguresMezco ToyzOne:12 Collective
← Previous Story From Acolytes of the Beyond to Elna Zibsara: Star Wars: The Rise of Skywalker Visual Dictionary
Next Story → If You Have This Ghost Statue, You Have Everything