Keep Calm and Tracer On! 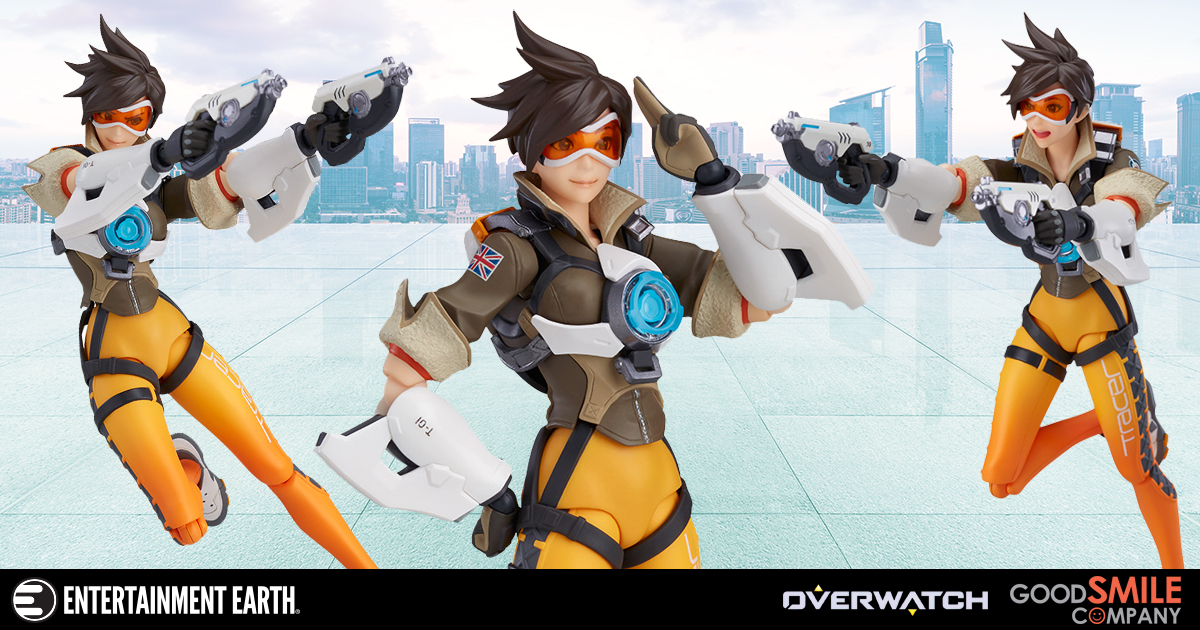 Whether you were introduced to her in game or through the wildly successful animated shorts prior to the release of Overwatch, it’s hard to not to fall in love with the playful character Tracer. Her quick wit has made her a fan favorite while her time traveling abilities have made her playability in game incredibly versatile for players of any skill level. It’s no wonder she is the first Figma action figure from Overwatch.

Like so many, I was a fan of Overwatch well before playing the game. I remember her story with Widowmaker in the second animated short “Alive.” Not only were you given a clear sense of her purely good nature but all of her fighting abilities were gracefully showcased. According to her backstory, her fearless nature caused her to be handpicked to test a teleporting fighter jet called Slipstream. When things malfunctioned her molecular structure changed making it impossible for her to stay in any one place for too long. Eventually, she was fitted with a chronal accelerator, which is the white piece of hardware she is buckled into. This helps her stay anchored to her present physical place in time as well as give her the ability to time travel.

Having a clear sense of how Tracer came to be made, it’s very easy for me to fall in love with her from the beginning. She may seem simple but it’s the subtle details that give this Brit a real sense of flare. Figma obviously understands this and has been able to create a super detailed and highly articulated action figure any fan would be lucky to capture for their collection.

Taking a look at the figure you can see all of the amazing detailing from the gradient paint job on her yellow to orange leggings to the patches that adorn the arms of her cropped brown leather bomber jacket. Even the fur lining is beautifully sculpted to look fluffy to the touch. Her hair resembles her cute pixie cut and shows off her now iconic silhouette. While all of this is super impressive, Figma is really well known for their articulation and detailed accessories, which they really deliver here.

Her accessories include her trusty double Pulse Pistols, Pulse Bomb, and a stand to help create otherwise impossible action poses. She also comes with three interchangeable faces. First, you have a confident and serious face that help to show off her determined spirit. Then there is a simple neutral smiling face that is perfect for her strong ready for anything poses. Finally, she comes with an excited expression with a beautifully sculpted open mouth that almost looks like she’s speaking one of her many fun catchphrases. Couple all of this with the insane articulation and the versatility in what poses you come up with are endless. Even her toes are articulated to really show off some speedy action poses!

I could go on and on about how impressive this action figure is but if you are a fan like me you’ll want to get your own to see what sort of fun poses you can come up with for Tracer. She’s now available for pre-order and is not one you want an action figure you’ll want to waste time putting in an order for. Well, that is unless you have your own chronal accelerator and the ability to time travel yourself.

I’m happy that Figma is adding this Overwatch Tracer Figma Action Figure to their plethora of action figures. It’s definitely something the fans will cherish. I know I’m ready to order mine and to quote Tracer, “Keep calm and Tracer on!”

Which character in Overwatch is your favorite and you’d like to see Figma put out as an action figure? Let us know in the comments.

Action Figures Collectibles
Related ItemsAction FigureFigmaGood Smile CompanyoverwatchtracerVideo Game
← Previous Story Get on the Right Side of the Law with These Judge Dredd Vinyl Figures
Next Story → Don’t You Wish You Had Your Own Batcave?