Show Your Genius by Adding This Pinky and the Brain Convention Exclusive to Your Collection! 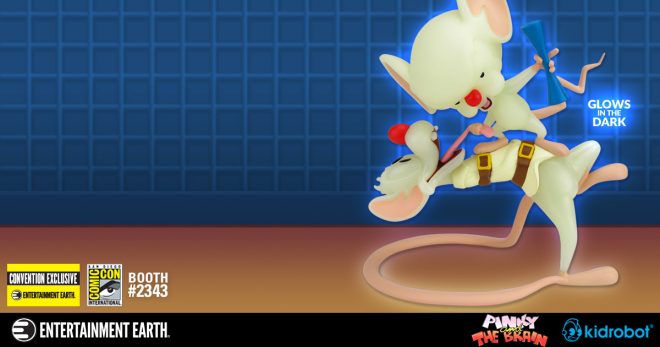 Gee Brain, What Are We Gonna Do Tonight?

Capturing these two in a moment of mad brilliance, this 8-inch figure depicts The Brain explaining to Pinky how the world will be theirs; however, having been exposed to something that can’t be good for them, the two have a radioactive glow.

The Same Thing We Do Every Night, Pinky – Try to Take over the World!

Known for their dynamic, high energy comedic adventures, Pinky and the Brain were an obvious choice for a stand-out collectible for this year’s San Diego Comic-Con. Entertainment Earth teamed up with Warner Bros. and Kidrobot to ensure that the figure would capture the original aesthetic, sculpted into three dimensions, perfect for your shelf. Warner Bros. made certain that the design concept was loyal to the show, while Kidrobot worked overtime to make a figure that would look like a freeze frame of the cartoon, one that would stand up on its own; this is not an easy thing for an artist to do!

The touches of Pinky’s straight-jacket and Brain’s blueprint for world domination came in the final stages, further complicating the sculpt, but adding a perfect final touch. Fans of this show will see it as a terrific compliment to their collection and will respect the delicate balance that brings this figure just outside of the realistic, making it a full 360-degree frame of the cartoon!

The first opportunity for fans to grab this Pinky and the Brain – Convention Exclusive will be at San Diego Comic-Con on July 18, 2019, at the Entertainment Earth booth #2343.