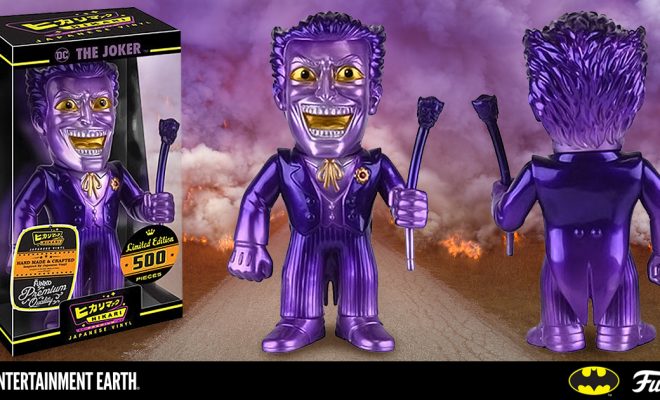 Mistah Jay has long been a vision in purple, from the Technicolor Cesar Romero days to the animated years when a certain Jedi Master lent the character his voice. (He still does, but I digress.) In 1989, he even ran amok to a rowdy soundtrack by Prince – the man synonymous with the color.

Funko has taken this and run with it like a footballer towards an end zone. Presenting the Batman Plum Crazy Joker Hikari Sofubi Vinyl Figure, a plummy, chummy take on everyone’s fave agent of chaos.

From hair to toe, the Clown Prince of Crime is resplendent in mauve, save for a few touches of complimentary yellow in his ribbon tie, boutonniere, eyes, and grinning mouth. Even his wonky walking stick is color coordinated.

This Hikari take on the classic character stands 7-inches tall and is limited to only 500 pieces worldwide – each is hand-numbered, and comes in a collector-friendly window package.

The lavender larcenist won’t linger for long, so pre-order today and nab him for your collection this November!