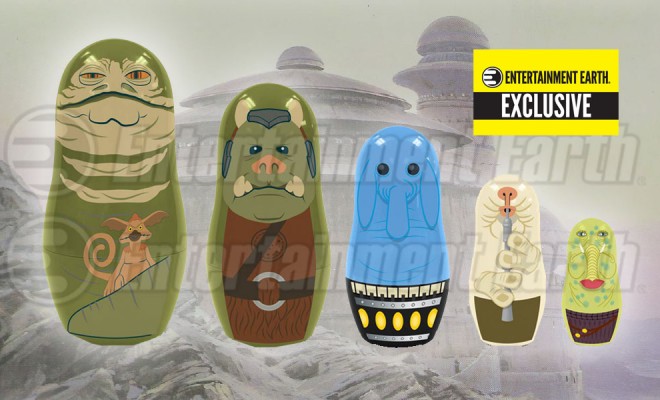 The infamous crime lord is inviting you to an exclusive party at his palace, accompanied by some of the most vile and musical characters in the Star Wars universe.

Based on traditional Russian nesting dolls, these brightly colored plastic figures measure 2 to 4 1/2-inches tall and faithfully recreate the boss man himself and his entourage.

First up is Sy Snootles, a female Pa’lowick and lead singer of the Max Rebo band. She’s accompanied by the next figure, Droopy McCool, a Kitonak who plays a flute in the Max Rebo band. Of course, they also need their leader, Max Rebo, a male Ortolan, and third figure in the set.

A Gamorrean guard, derogatorily known as a pig-lizard, is the second largest figure. Hired for their inexpensiveness and dull minds, Jabba uses them as bodyguards in his palace.

Last is Jabba the Hutt, looking particularly slimy and grotesque as the largest figure. He’s accompanied by Salacious Crumb, a Kowakian monkey-lizard.

You won’t want to miss out on these unique figures so you can proudly display them on your Sail Barge’s dashboard while you sing “Lapti Nek” on your way to work.

The nesting dolls are exclusively available at Entertainment Earth, with an expected arrival of December 2015.