Are You Ready for a Shopping Spree with Harley Quinn?

Who’s ready to go on a shopping spree? Harley sure is in this new Batman The Animated Series Premier Collection Harley’s Holiday Statue.

This statue comes straight from the title card for the Batman: The Animated Series episode, “Harley’s Holiday.” In this episode, we follow Harley Quinn being released from Arkham Asylum with a clean bill of health from her psychiatrist. Now that she is getting out, Harley is determined to want to live her life right as a sane member of society. We quickly see her enjoying her new freedom as she roller skates around Gotham with her pet hyenas. The other residents aren’t exactly giving her welcoming stares, or maybe it’s the presence of her companions, but it sparks her to go on a shopping spree to update her wardrobe.

After a misunderstanding over a security tag still attached to a new dress Harley purchases in a department store, she quickly reverts back to her old costume and old villainous ways. She flees the store, steals Bruce Wayne’s car, and takes a hostage. The rest of the episode consists of Batman and Robin chasing Harley before the cops get to her and toss her back in Arkham Asylum over the misunderstanding. Of course, Harley ends up ruining her chance to stay out and ends up back where she started. 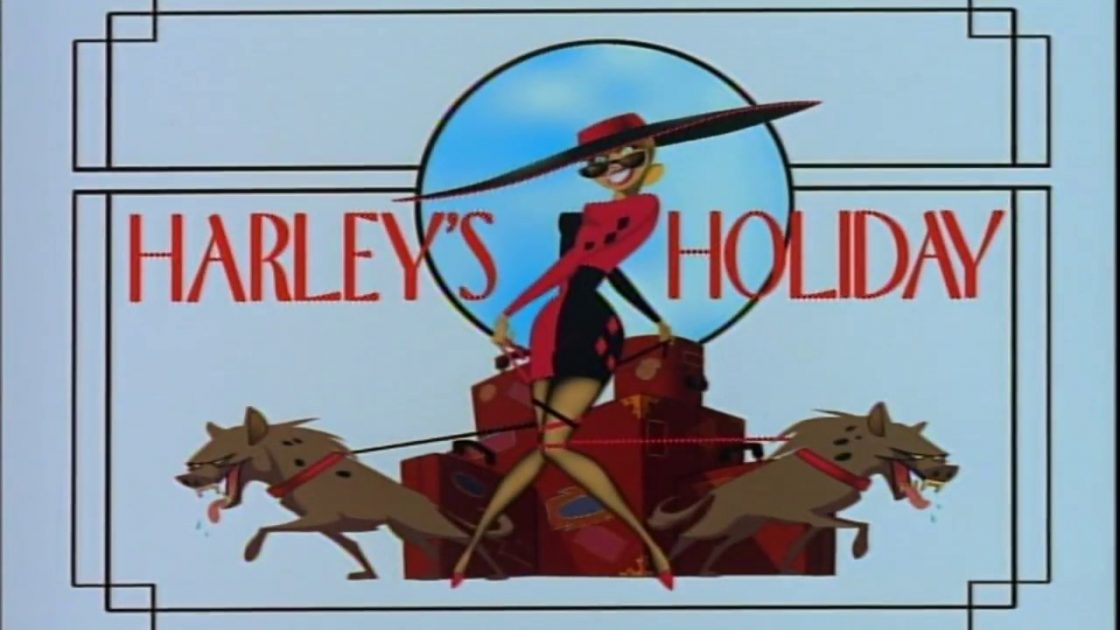 This episode is very endearing and shows a quick title card at the beginning of Harley in a black and red mini dress, oversized hat, and wrapped up in the leashes of her two pet hyenas. This has inspired Diamond Select to commission Clayburn Moore to sculpt the new Batman The Animated Series Premier Collection Statue. Moore has done a fantastic job of bringing this title card to life. From the vibrant colors to her subtle twisted stance, this statue is definitely a great piece any fan of Harley to add to their collection.

She stands about 12-inches tall and is made out of resin as a limited edition run of only 3,000 pieces. Each one comes in a hand-numbered package with its own certificate of authenticity. She will be released in January 2018 but luckily you can pre-order now and receive free shipping if you are within the U.S. Now that’s a great deal!

She’s a great addition to add to any Harley Quinn fan’s collection so don’t miss out on this amazing Series Premier Collection Harley’s Holiday Statue!

Do you have a favorite Harley Quinn episode from Batman: The Animated Series? Share with us in the comments.

Collectibles Statues
Related ItemsBatmanBatman: the Animated SeriesDCHarley QuinnStatue
← Previous Story The Classic and Original Symbiote is Back!
Next Story → Don’t Miss Out! Add These New Stargate 1:2 Scale Prop Replica Helmets to your Collection!