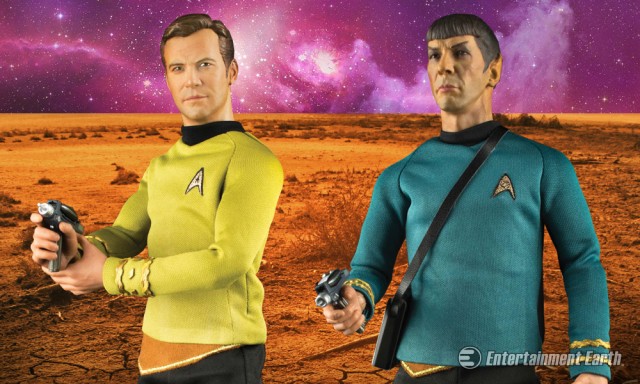 You won’t believe the detail or the likeness. These Star Trek TOS Kirk and Spock 1:6 scale action figures are simply the most incredible that you have ever seen.

Star Trek (TOS, of course) could be considered by many as the founding moment of modern science fiction entertainment. Capt. James T. Kirk and his counterpart, Mr. Spock, represented two sides of the same man. Kirk was the embodiment of passion and emotion, while Spock showed the logical, reasoning side of humankind. Together, they led the most ambitious mission of discovery ever imaged, setting off into uncharted realms of the galaxy to act as emissaries for known civilization. They were a necessary balance, deeply sensitive and utterly logical. Without each other, they could never have spoken to the inner hearts of so many in television, movies, and books.

Now is your chance to bring the team home in a way that has never been available before.

These Kirk and Spock figures feature uniforms that have been meticulously analyzed and researched, fabricated to be the most ideal match of color and texture possible. Besides the classic tunics, they have black undershirts and brown belts exactly like the ones featured in the first season of the show. The accessories, such as the phasers and communicators, are spitting images of the technology seen in the original series that helped to design the way that modern technology works today.

These well-articulated figures also come with three sets of hands, allowing for endless display situations. And of course, a high quality stand completes the package, allowing for diversity of use.

The five year mission may have been over ages ago, but this is your first chance to truly bring Kirk and Spock home! Available for pre-order with free shipping from EntertainmentEarth.com!