Quash the Rebellion with the Inquisitor Maquette Statue 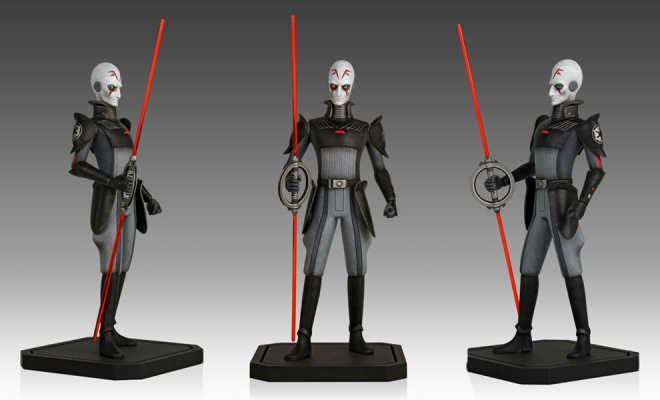 Crafted by master artisans in the bold style of the exciting new animated series, the 1:8 scale Star Wars Rebels Inquisitor Maquette Statue is as screen accurate as you can get. Because each hand-painted piece is cast in high quality polystone, no detail is overlooked. The Inquisitor’s distinctive double-bladed lightsaber and intricate black uniform are carefully crafted. Each individually numbered statue comes with a matching certificate of authenticity.

The legendary Star Wars saga continues with Star Wars Rebels, an animated series set 5 years before Episode IV: A New Hope. The Empire is amassing its stronghold over the galaxy. At the onset of this new series, the Emperor deploys his most dangerous servant, the Inquisitor, to eradicate all traces of the Jedi from the galaxy. The villain will stop at nothing to achieve this objective.

Star Wars Rebels: Spark of Rebellion will air on Friday, October 3 on Disney Channel, with the animated series beginning on Monday, October 13, on Disney XD.

The Inquisitor Maquette is currently available for pre-order at Entertainment Earth and is slated to arrive in December 2014.

Give in to the dark side.