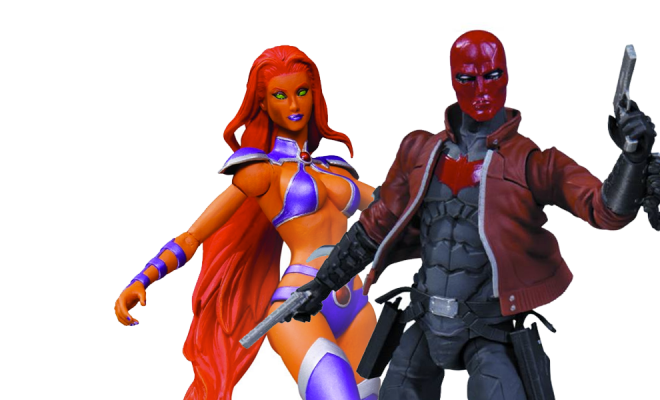 Welcome to the New 52 with Red Hood and the Outlaws as collectible action figures!

Launched in 2011, Red Hood and the Outlaws is a team consisting of Red Hood, Arsenal, and Starfire. The Outlaws team was originally written by Scott Lobdell with art by Kenneth Rocafort. The Outlaws must work together or disband.

These Red Hood and the Outlaws action figures are based on the designs in DC Comics. The action figures stand 6 3/4 inches tall and come in blister packaging. Available from this line are The Red Hood, also known as renegade ex-Robin Jason Todd, Starfire, as exiled Tamaranian princess, and Arsenal, the disavowed Green Arrow protege Roy Harper. Arsenal’s ball cap is capable of being turned around to encapsulate his sarcastic attitude.

Join the Red Hood, Arsenal, and Starfire as they unite to take on whatever this or any other planet has to throw at them with these fantastic figures! Set them up alongside each other or your other DC Comics action figures for a fantastic display.