Entertainment Earth had the pleasure of interviewing Funko’s Lead Designer, Reis O’Brien! We have long admired his work, from the concept sketches to the toys and collectibles that result. Check out the interview below, and make sure to check out Reis on Instagram. Thanks, Reis!

For a dyed-in-the-wool, lifelong toy-loving geek like myself, it’s inarguably a dream come true. Everyday I get to drive to a place that’s part Santa’s workshop and part Willy Wonka’s chocolate factory. Except, you know, with less chocolate. And more toys.

2) Funko is growing rapidly in the toys and collectibles industry. What do you think makes Funko special? To what do you attribute its success? 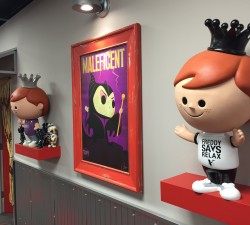 There are a ton of factors involved in Funko’s success. First off, we’re led by a person who genuinely loves toys and collectibles and is still directly involved with the process. Our boss (Brian Mariotti) is still that big kid who can look at a new toy and go, “That’s so cool!” Secondly, our staff is the best on the planet. We’re all kindred spirits banded together to make the coolest stuff out there. But most importantly, we have amazing collectors! They’re a special breed of fun-loving people who like sharing their collections as much as building them, and their loyalty is prized around here.

3) How did you become Lead Designer at Funko? Did you have a previous background in toys?

I had always been an armchair student of the toy industry, but it took me several years to break into it. I spent several years designing graphic tees for a company that had a very small portion of their business devoted to toys, which no one wanted to take charge of. So I volunteered to be the “toy guy”, and that’s where I started to learn the basics. Later, I ended up designing collectibles for Funko’s original owner with his side project called Mixo. Eventually, Mixo was bought by Funko and that was my way through the front door.

4) What is your design process for creating new products at Funko?

I basically start out by sketching concepts for the product, either with good old-fashioned pencil on paper or straight to the computer. After that, the product will go through several rounds of approvals and revisions, through a sculpt stage, a paint stage, a packaging stage and so on until the final product is approved and ready to be shipped out to retail. It takes a team of focus people just to get one Pop into peoples’ hands, so it’s important that we work together and all keep on the same page.

5) Which license do you think Funko should tackle next?

Yikes, that’s a big question! We’ve managed to land several of our dream licenses in the last year or so, like Harry Potter and Doctor Who, but there are still a few white whales out there that we’d love to get our hands on and a couple that are very close to happening, but I don’t think I can talk about those just yet. There’s also a constant flow of suggestions from collectors, so it’s just a matter of keeping our ear to the ground to see what people would like. Personally, I’ve been dying to design Pops for Scooby Doo, Archie comics, Smurfs, and Conan the Barbarian. But those are just personal wishes. Hopefully I’ll get the chance to work on them some day.

6) While Pop! Vinyl Figures are arguably Funko’s most well-known line of products, the company also creates Fabrikations, Hikari, Dorbz, Vinyl Vixens, and more. What is your favorite line of Funko products?

Mystery Minis. Hands down. I’ve worked on several of the various lines, including Game of Thrones, Walking Dead, GPK, and the Horror and Sci-fi sets. I love working on them! For me, they offer the most room for experimentation in design. You can break out of the mold a bit, stretch your creative muscles. Don’t get me wrong, I love the challenge of working within the parameters of Pop design, but Mystery Minis have become the toy line that I get most excited about. But, man, they’re a lot of work.

7) Do you have any favorite non-Funko collectibles? What upcoming products are you excited about?

Well, for the gazillionth time in my life, it seems that I have been diagnosed with Star Wars fever again, so I’ve been running around trying to hunt down the latest 3 3/4″ 5POA and 6″ Black figures. I’m also currently madly in love with Bif Bang Pow!’s Flash Gordon figures. So beautiful!

8) Force Friday was a big day in the toy industry; what was most memorable about it for you?

I’ll never forget where I was at 12:01 AM on September 4th. I was at home asleep. I think I’ve finally hit that point in my life where I just don’t have the energy to wait in a midnight madness line anymore. I resolved that I would just check things out the next day and if anything was left over, then I would accept it as serendipity. So I stopped at a Walmart on the way to work, just to see what was left. I walked in to the toy section to find two employees opening up a couple of pallets of figures. It was, like, me and three other dudes. We just walked up, grabbed everything we wanted and went to the checkout. It was amazing.

9) What’s it like to have so many social media users following you for your design work at Funko?

It’s so weird! Well, sometimes it’s weird. Opening yourself up to social media when you work on something that’s loved by so many collectors has its ups and downs. I do occasionally have to dodge the trolls or avoid the greedy, but for the most part, getting to know the collectors has been endlessly rewarding. It keeps you in check, reminds you why you do what you do. Sometimes, when I’m working on something and I’m feeling exhausted and I’m not sure if I want to check on exactly how many rivets are in Batman’s armor in the Arkham games, I remember that there are people out there, that I’ve spoken with and possibly even met in person, that are counting on me to get the number of rivets right. I don’t want to design in a void. I need to be reminded that there are people out there just wanting to love these toys, and it’s my job to give them something worthy of loving.

10) We’re all really excited to see what comes out next from Funko! Can you give us a hint about what you’re working on?

Hmmmm… Things are all pretty top secret at this point. We’ve got the Horror and Sci-Fi second series Mystery Minis coming out. We have Wave 2 of our Force Awakens Pops coming in late December or early January. And we have a few things that are going to blow people’s minds, but if I spill the beans on those my boss will fire me. And I like my job. Sorry!