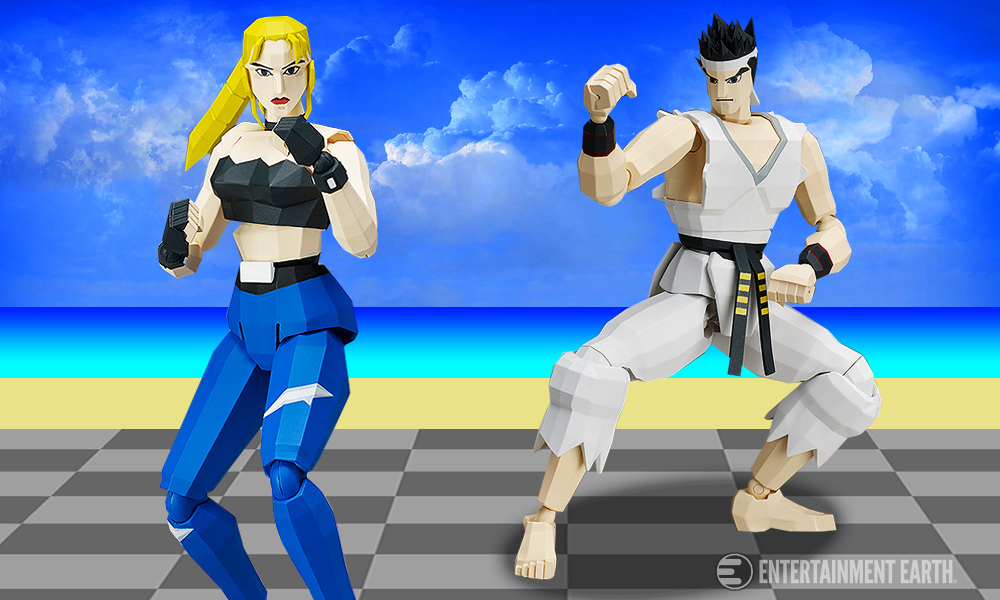 Collect those quarters and be prepared for a trip down memory lane. Virtua Fighter premiered in 1993 and is widely recognized as the first 3D fighting game ever released. Now you can take two of the iconic characters home with you with the Virtua Fighter Sarah Bryant and Akira P2 Version Figma Action Figure!

The first Figma is designed to recreate the look of Sarah Bryant from the original Virtua Fighter game! She stands ready for action in her classic blue pants and black crop top. Her signature blonde hair is kept out of her face in a long ponytail, so you know she means business! You can pose her in various classic attacks including her somersault kick. Sarah Bryant comes with both a standard expression as well as a shouting expression for her victory pose. This figure is made of PVC and ABS and stands slightly over 5 3/4-inches tall.

The Akira Virtua Fighter Figma stands poised to attack. His tattered robes and black belt show evidence that he’s seen many battles. His dark hair and expressive eyebrows let you know that he’s ready to face whatever enemy is thrown at him. You can pose him in various classic attacks including his “Tetsuzankou.” He comes with both a standard expression as well as a shouting expression for his victory pose. Akira Yuki is made of PVC and ABS and stands slightly over 5 4/5-inches tall.

Using the smooth yet posable joints of Figma, you can act out a variety of different scenes. A flexible plastic is used for important areas, allowing proportions to be kept without compromising posability. A large variety of interchangeable hand parts are included to recreate various moves. An articulated Figma stand is included, which allows various poses to be taken.

Both of these figures will be available in November 2016, so place your pre-orders with Entertainment Earth now!