I’m Mr. Meeseeks! Look at Me!” Entertainment Earth Gets Schwifty with New “Rick and Morty” Collectibles at San Diego Comic-Con!

Gearing up for San Diego Comic-Con this year, Entertainment Earth has been working on ways to bring fan-favorite characters to life in new yet familiar ways. Justin Roiland, Co-creator and executive producer of Adult Swim’s Rick and Morty, has built such a wonderful animated universe with so many memorable characters, and one of the most toyetic, Mr. Meeseeks, lends himself to multiple forms. Check out these two classic twists featuring none other than Mr. Meeseeks! 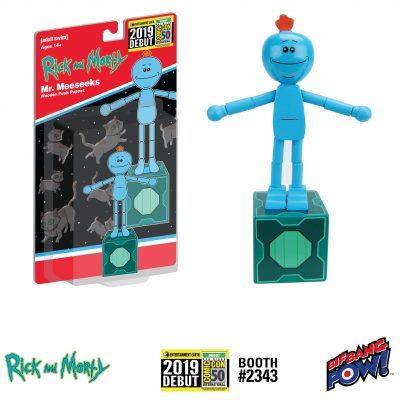 With his huge ridiculous head, his thin limbs, and his box as a natural base, it only makes sense to turn Mr. Meeseeks into the Rick and Morty Mr. Meeseeks Wooden Push Puppet – Convention Exclusive. We like to think of the classic push puppet as the original fidget toy – push the button to watch the character collapse; release the button and watch the character pop back up. With varied manipulation and a decent sense of rhythm, you can make Mr. Meeseeks master any dance! This retro-style toy is decorated with 360-degree artwork and stands 4 3/4-inches tall. Created from solid wood, this new spin on a classic favorite can only be yours if you’re quick!

Another obvious fit for Mr. Meeseeks is the Rick and Morty Mr. Meeseeks Jack-in-the-Box. From deep in his box, you can summon Mr. Meeseeks by twisting the crank, listening to “Pop Goes the Weasel,” and being startled by the blue humanoid creature you’ve called forth! With a detailed plastic head and fabric body, this kooky, edgy character in an innocent classic toy is a delight, and the juxtaposition is a great conversation starter. In fact, made really close to scale, this toy is practically a prop replica! But you’ll have to move quickly yourself if you want to lay your hands on this 5 1/2-inch box full of fun.

Cartoon Network Enterprises, always justifiably protective of their characters, was involved in the development of these innovative collectibles. Both took over a year in development, as we worked hard to get every detail just right. This marriage of the classic and the new works seamlessly, but it’s not simple to pull off.

The first opportunity for fans to grab these exclusive Rick and Morty collectibles will be at San Diego Comic-Con on July 18, 2019, at the Entertainment Earth booth #2343.