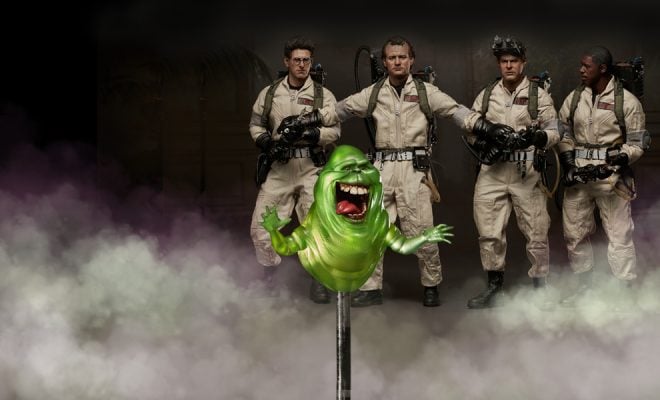 Ivan Reitman is recognized among the great filmmakers of the ’80s, along with Spielberg, Lucas, and Cameron. Solid, memorable movies like Stripes, Meatballs, and Twins don’t grow on trees. But there are few contributions to the lexicon of cinema as significant as 1984’s Ghostbusters. Not many movies among the hundreds that came out in the ’80s are remembered by the culture with as much admiration, respect, and fervor.

If you are a serious collector or very serious fan of the Ghostbusters, you’re not going to want to miss out on this. Blitzway presents this amazing Ghostbusters 1984 Classic 1:6 Scale Action Figure 5-Pack. This collection features the most highly detailed action figures imaginable. Included are heroic Ghostbusters, Egon Spengler, Ray Stantz, Peter Venkman, and Winston Zeddemore, as well as their most memorable adversary, Slimer.

With highly detailed head sculpts, these action figures resemble the actors in a very uncanny way. The costumes are accurately tailored to appear just like the uniforms did in the first film. The fully articulated figures are 1:6 scale, measuring 12-inches tall, except Slimer, who is understandably smaller, being built to scale. With 30 points of articulation and a wide variety of extras, including multiple hands and accessories, you can pose these figures in endless ways.

Blitzway has been working in the industry a very long time. They have found the best and most skilled artists to handle this delicate work. Their figures are deeply expressive – they capture more than just realism, they capture character and meaning. While this set comes in at a little under a thousand dollars, serious collectors will not want to be without it. This collection from our library of really cool, really expensive stuff isn’t available yet, but can be pre-ordered from Entertainment Earth!