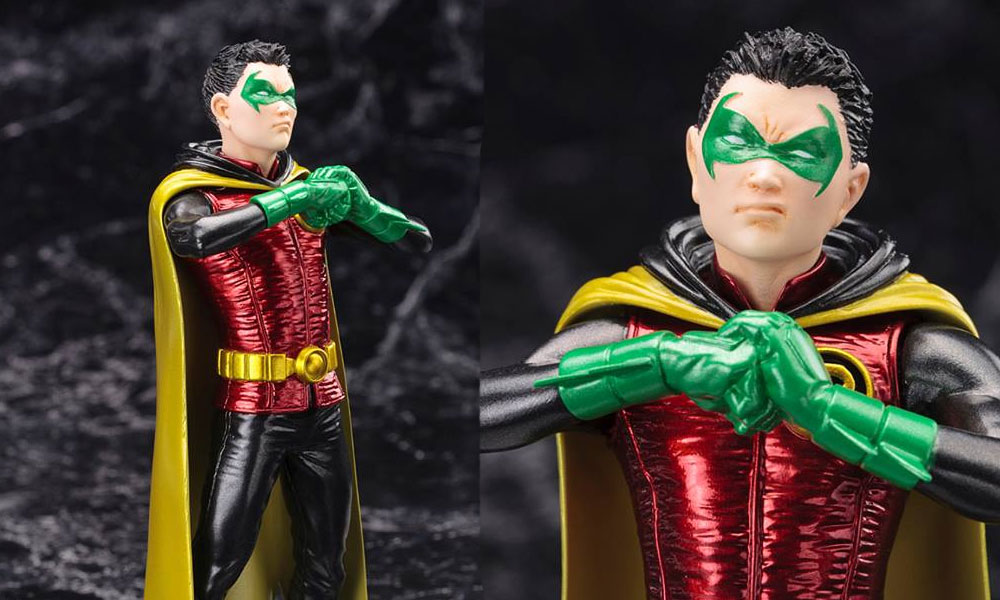 This DC Comics ArtFX+ Statue from Kotobukiya returns to the pages of The New 52 with a controversial yet popular anti-hero and the youngest in a long line of Batman’s sidekicks, Damian Wayne as Robin! This Damian Wayne statue is a perfect representation of the character with every ounce of Robin’s cockiness and brutality poured into his vicious, knuckle-cracking pose! The teenage martial artist stands with his feet spread wide, balanced and ready to leap into the fray.

He wears his unique take on the traditional Robin costume with tight black pants, green gloves and boots with red laces, a textured red shirt, and bright yellow cape. Every detail from the comics is replicated here including his yellow utility belt, black and gold “R” symbol on his left breast, the blades on his gauntlets, his hood pushed back over his cape, and more. Meanwhile, the expression on Damian’s face is outstanding, conveying his disdain for those around him with a haughty sneer that’s barely covered by his green mask!

Sculpted by Atelier Bamboo, Damian Wayne Robin stands just under 6 1/2 inches tall (in the ArtFX+ 1:10 scale) and like all ArtFX+ statues he has magnets in his feet for extra stability on his included display base. Whether you’re a fan of the hardcore Robin or a collector of everything related to the Batman series, Damian is going to hold a prize spot in your collection and he looks fantastic alongside the previously released Batman and Nightwing ArtFX+ statues! (sold separately)

First named in comics in 2006, Damian put on the mask in 2009 to clean up Gotham City with his unique and brutal style of crime-fighting. The young Wayne was trained by the League of Assassins without morality or civility, but came to learn and become a more well-rounded human being under the tutelage of then-Batman Dick Grayson. In DC Comics’ The New 52 stories, Damian adventured as Robin to his father’s Batman until the youngster’s untimely death… although his status is likely to change in the current “Robin Rises” storyline!