Rocky and Mickey Get Brisk in This Maquette 2-Pack

In the late 70s, popular culture was turned on its head with the phenomenon that is Rocky. The inspiring story about a small-time boxer taking on the heavyweight champ introduced the world to Sly Stallone and the best underdog story ever put on film. This saga lasted through 80s in a series of successful films.

Long before the 21st Century reprisal of the character, the 90s had a brief bout of nostalgia in the form of a Lipton Brisk Iced Tea commercial starring Rocky and his trainer, Mickey. The stylized puppets had tremendous selling power and the 30-second TV spot became a memorable moment in popular culture history.

Now you can mark that strange, unforgettable moment with this Rocky and Mickey Puppet Maquette 2-Pack. This pack includes two limited edition maquette statues based on the stop-motion commercial. These maquettes are modeled exactly like the stylized stop-motion puppets, recreated with extraordinary detail. The caricatures are instantly recognizable and command a lot of attention.

Rocky stands at about 12-inches tall and Mickey stands just under him at about 10-inches tall. Rocky sports fabric boxing shorts and Mickey is wearing fabric hats and clothing. The statues are in perfect scale to each other and are so intricately detailed that they have movable eyes, capable of being repositioned in a number of ways.

This amazing Rocky and Mickey Puppet Maquette 2-Pack comes with two display bases and is limited to only 1,500 pieces, worldwide! If you don’t want to miss this chance, you’d better pre-order yours today at Entertainment Earth! 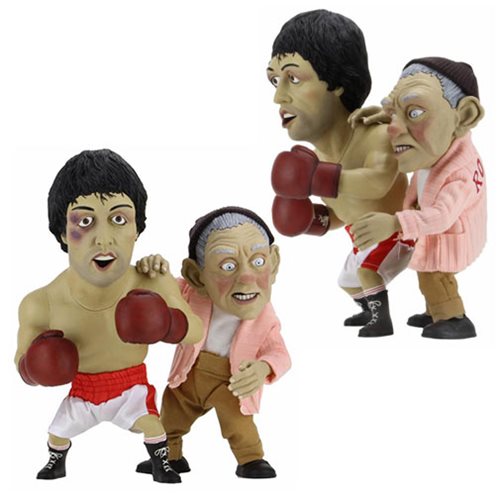