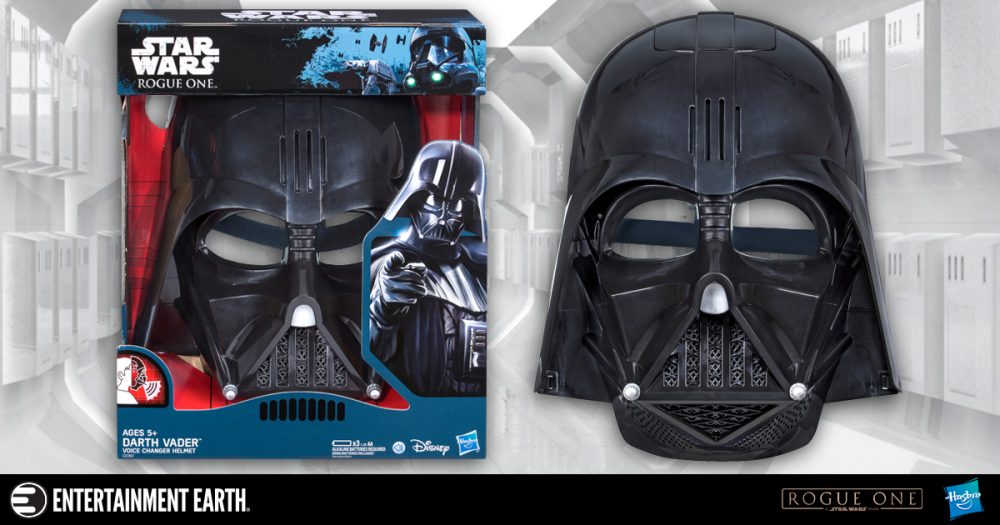 If you stack up the villains from every movie ever made, starting with the most forgettable and finally topping everything with the greatest villain in cinema history, you would have a giant monument to Darth Vader on your hands. This is no exaggeration. In fact, not only is Vader the greatest villain in movie history, he could be the greatest character in the history of film. Everything from character design to haunting presence to his dark, brooding voice made him in command of every scene he occupied in the original trilogy. Unless you’ve been living on Dagobah, you’ve heard that Vader is returning to the big scene in Rogue One: A Star Wars Story. Will he continue to be the dominating force that he once was?

No matter how things turn out in the new film, you can take command of any situation you’re in with the Star Wars: Rogue One Electronic Darth Vader Voice Changing Helmet. This helmet lets you put on the threatening face of the Empire and take on the deep, treacherous voice as well. It’s like getting the keys your very own Death Star.

Do not underestimate the power of this helmet! The quality and details are outstanding. This is nothing short of a replica of Vader’s helmet as it appears in Rogue One. Your impression of the Dark Lord of the Sith will shine out of his icy gaze, striking fear into all you see. You will still be more man than machine, but it will be the electronic parts that people notice.