Which Sailor Moon Crystal Statue is Your Favorite?

About three years ago, Sailor Moon got a reboot with an all-new series called Sailor Moon Crystal. The new series has a more sleek design and follows the original manga by Naoko Takeuchi more closely than the original animated version. Since 2014, three seasons of Sailor Moon Crystal have been released and in June 2016 they wrapped up their third arc. The show is currently in hiatus but during their 25th-anniversary celebration Toei announced the fourth season will most likely be released this year! It will follow the manga’s “Dream” segment, which previously served as the plot for the 1990s series Sailor Moon SuperS. Unfortunately, we have no further information since the initial announcement, but until then why not stock up on some awesome Sailor Moon Crystal statues!

So far, Bandai Tamashii Nations has released most of the Sailor Moon Crystal Inner Senshi in their Figuarts ZERO Statue line and they were well received by fans. Well, buckle your seat belts Sailor Moon Crystal fans… because here comes the Senshi of the Outer Solar System! Well… three of them. Hopefully, we see Sailor Pluto make an appearance soon!

The Sailor Moon Crystal Sailor Uranus Figuarts ZERO Statue is highly detailed with pearlescent accents on her costume. The Soldier of the Sky stands ready to defend us all. You can equip her with her talisman the Space Sword or the Space Sword Blaster. She measures roughly 8-inches tall on top of a translucent stage with a bow on the back. 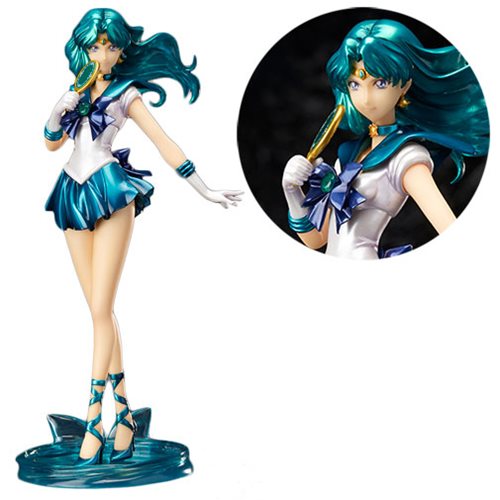 Where would Sailor Uranus be without the help of Sailor Neptune awaking her? Probably wandering Earth with not a clue as to who she is. I digress… the point I’m trying to make here is you need this Sailor Moon Crystal Sailor Neptune Figuarts ZERO Statue! Especially if you get Uranus. They can’t be separated! The Soldier of Deep Waters stands 7 7/10-inches tall and is posed holding her talisman the Deep Aqua Mirror. Her suit and hair feature the same pearlescent detail as the other Sailor Moon Crystal Figuarts ZERO statues but hers is more delicately sculpted to give it the appearance of lightly blowing in the wind. She stands on a translucent stage with a bow on the back that matches her primary color.

The Soldier of Ruin and Birth has emerged once again. This time in the form of a Sailor Moon Crystal Sailor Saturn Figuarts ZERO Statue. She stands 7-inches tall but with her Silence, Glaive held behind her back she stands about 10-inches tall. She also stands on a base designed in her primary color with a sculpted bow on the back.

Make sure you pre-order this beautiful Senshi of the Outer Solar System statues now.