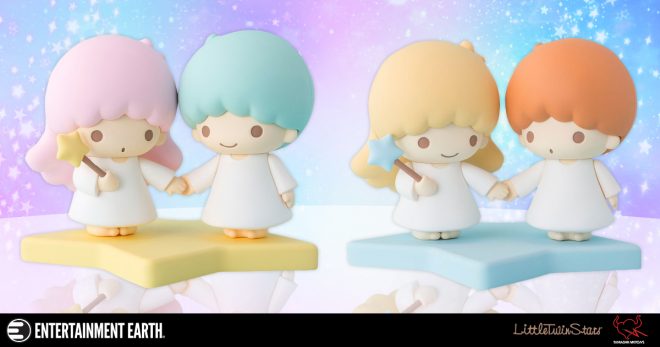 The Little Twin Stars have been a popular staple in the Sanrio line since 1975. Lala and Kiki are two adorable twins who traveled to Earth from the Omoiyari Star in the Yume Star-Cloud. Lala was born first and is depicted with long blonde or pink hair. She’s the timider of the two and enjoys drawing, writing poems, and cooking! Kiki is her twin brother and he is depicted with short blue or brown hair. He enjoys star-fishing and inventing things. He has an unwavering curiosity and is often quite cheeky.

Now you can own the Little Twin Stars in action figure form thanks to Bandai Tamashii Nations! The Sanrio Little Twin Stars SH Figuarts Zero Action Figure 2-Pack comes in two versions. The pastel version includes the twins with their blue and pink hair as where the retro version has them with their brown and blonde hair. Both sets come with interchangeable faces so either twin can be smiling or stuck with childhood wonder. They also come with two sets of arms that allow them to pose apart or holding hands. How cute is that?

Make sure you pre-order these cuties before they make their long journey back to the Yume Star-Cloud!