Since there are officially, according to the song, 12 Days of Christmas. We thought we would supply you with 12 Super Santa Suited Action Figures. Really, that’s as close as we can get for pulling the number 12 together with this Christmas list. This list, which we thought was going to be easy, actually started to become a struggle with certain figures bumping others off. For example, just a straight regular Santa would have been nice. He didn’t make the cut, but he sort of did (see the KISS figures below). Happy Holidays, Junkies! #AFJ4LIFE

This is one of those “blink” and you missed him LEGO minifigures. “Blink” as he came in a 2014 LEGO Star Wars Advent Calendar. That was a tough year, as it was with a uniquely crafted LEGO character making it a hot set.

Yes, the Demon, the Starchild, the Spaceman, and the Catman are all decked out for the holidays! Where can you get the members of KISS for the holidays? Check out Figures Toy Company to order yours! Want Santa and the Demon (sans the costume) together? They have that too (HERE)!

Damn, this is cool. Who wouldn’t want the Killer Santa Robot from Futurama! This is available on the Kidrobot site, HERE. If only spoke and sounded like John Goodman. 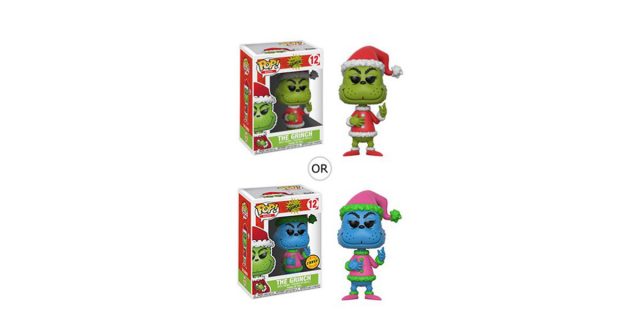 The Grinch surfaced last year but has yet to be vaulted by Funko. He probably never will be. Now there is a new version of the Grinch, from the new film, however, we went with the one true Grinch from the cartoon/ book.

This was an eBay exclusive from Palisades Toys. The line was Jim Henson’s The Muppets and featured none other than the Swedish Chef dressed up as Santa. He came a magnetic Santa hat, string of Christmas lights, and wreath as accessories. The whole Muppet line, by Palisades Toys, is quickly becoming legendary with their figures, accessories, and now their secondary market prices. The Swedish Chef as Santa was just too cool not to include here.

This is one holiday-themed action figure that every fan of The Twilight Zone should own. Now Big Bang Pow! has done Santa from “Night of the Meek” before but this Series 2 colored edition was easier to find than other previous incarnations. Now? Not so much. If you aren’t sure which Twilight Zone I am talking about, turn on Season 2, episode 11 and grab a box of tissues.

Another rendition of Clark W. Griswold for the homestead? Why not? What better thing to put on display than Clark in all his holiday glory from the end of the film. Don’t expect to tap dance yourself into one of these right away, they have quickly become hard to find. Entertainment Earth also has them out of stock (HERE). Hopefully, next year, we will have a figure of Clark in his Black Hawks jersey.

Despite Sally never actually wearing this outfit in the film, this two-pack from Diamond Select Toys is or was an immediate classic. It is now out of print and exits on the secondary market. Best of luck finding one, Junkies, without breaking the bank.

Who didn’t receive numerous Star Wars figures, play sets, or vehicles every holiday season? Now it just doesn’t seem right if there isn’t something with Star Wars written on it under the tree. Our favorite has to be the Santa Yoda but if you prefer someone else there is an all red Darth Vader (not suited in a Santa outfit) and a set of holiday Jawas (more like elves) too (more below).

This was Walmart exclusive released in 2002 and based on Ralph McQuarrie Christmas card design for Lucasfilm Ltd. from 1979. This is clearly one of those niche areas of collecting. If you love Star Wars, Ralph McQuarrie, and Christmas its a three-time win though.

Released by Diamond Select Toys he was easily found, when he debuted, at Toys R Us. Now, this 7-inch Santa has become hard to find. He also came with a Christmas Elf as an accessory.

Above we pictured the exclusive pre-order version of Billy from Scream Factory that was available last year (with poster and Blu-ray). You can now get just Billy HERE and at retail stores such as FYE (seen HERE).

***Honorable Mention***
DC Collectibles – The Joker from “Christmas with the Joker”

All right, he isn’t 100% decked out like Santa, but he was too good to pass over. There aren’t actually a lot of DC Comic Book characters in holiday garb. We included him because we love what DC Collectibles is producing and the “Christmas with the Joker” is a must-watch for us here at AFJ HQ.

This article originally appeared on Action Figure Junkies. The views expressed in this article are solely those of the writer and do not necessarily reflect the views of Entertainment Earth, Inc. its owners, officers, employees, affiliates, subsidiaries, partners, vendors, customers or licensors.