Many of us grew up playing with (and trying to avoid stepping on) one version of building blocks or another. In fact, if you’re here on this website, you probably still tinker around with the little guys even today. Whether you were the type to buy the sets and build something specific with intricate instructions, or if you preferred to just buy a whole load of random pieces and create whatever your heart desires, interlocking blocks have been a cornerstone of creativity for decades.

The Nanoblocks team leans to the former of those two options, providing fun, tiny constructible options in the form of your favorite animals. They’ve got a whole swath of options, ranging from bugs, to reptiles, to large mammals, and they can all be perfectly snapped together to form your favorite friends.

If you live in a pet free community and have a desperate need for a puppy of your own like me, you collect all sorts of pupper related things. This one probably won’t be super comfortable if you try to snuggle up to him, but look at how adorable this little Golden Retriever is!

You either love otters, or your soulless, okay? Just kidding (not really)! They hold hands when they sleep, guys. They bang things against rocks with their fluffy yet secretly sharp otter paws. They move like they have no skeletal structure! They’re adorable, and we can’t own them, but we can build them!

Make your very own Pascal with this adorable little chameleon. Also probably get Karma Chameleon in your head. Or I just did it for you, but still, look at this cute little guy!

If sea creatures, lizards, and puppies aren’t up your alley, first of all, why don’t you like happiness? Secondly, perhaps this oddly specific Irish Elk will be more up your alley? Trample your enemies with this big guy, or just watch him get indignant when people call him a moose! 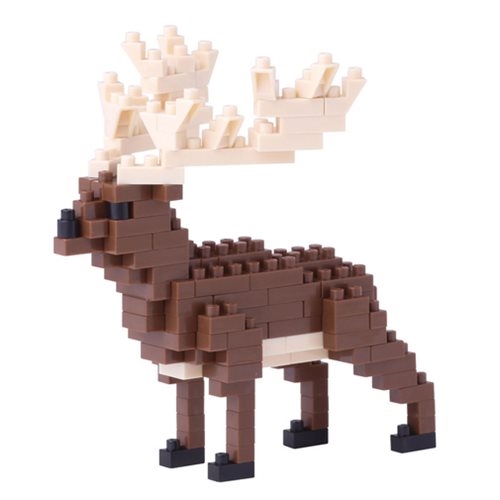 If you feel like you haven’t explored your mad scientist side enough and want to defile the laws of nature, why not explore genetic mutation by combining a couple of the constructible figures? What’s cuter than a Golden Retriever? Maybe a Golden Retriever with an Otter head!

Collectibles Fun Collectibles
Related Itemsanimalsnanao blocksschylling
← Previous Story Madballs Return in Miniature!
Next Story → Saitama Is Prepared to Punish with One Punch of Pain as This Powerful Statue