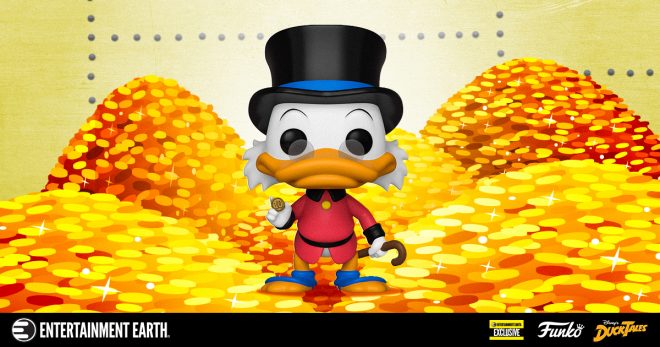 Ready for some DuckTales? Woo-oo!

Life is like a hurricane here in Duckburg. Race cars, lasers, aeroplanes, it’s a duck-blur! But you can bring home this fabulous Pop! Vinyl figure and create your own DuckTales from the popular cartoon series.

He’s tougher than the toughies and smarter than the smarties. Scrooge McDuck – your favorite Scottish duck tycoon – first appeared in the Donald Duck comic Christmas on Bear Mountain in December 1947 and was created by artist Carl Barks. This exclusive features the elderly duck in his iconic look – top hat, pince-nez glasses, spats, and in his red frock coat just like in the original comic books, NES game, and new Disney Channel series – where he’s voiced by David Tennant! Measuring approximately 3 3/4-inches tall, Scrooge McDuck comes packaged in a window display box.

This is the Scrooge you can’t afford to miss. He’s like the blue one… but better. Order Scrooge McDuck today!