We’re kicking off our SDCC 2017 coverage with a recap of Preview Night! That’s right, San Diego Comic-Con isn’t just Thursday through Sunday, Wednesday is part of the festivities too! Let’s dive head first into the fun.

While Wednesday night wasn’t filled with the big reveals and shockers that come from Friday and Saturday, there’s still going to be a lot of buzz this weekend from the DC Television world. With all the CW shows being represented, we’ll get a lot of good things from the Arrow, The Flash, Supergirl, Legends of Tomorrow, and Black Lightning panels. Also we should get a glimpse at the highly anticipated upcoming resurrected Young Justice series and the new SyFy show Krypton. Not to be outdone, Marvel will give us a look at the new Inhumans series as well as the next season of Agents of S.H.I.E.L.D. returning later this year.

Let’s not forget about TWIN PEAKS. Having recently returned and blowing everyone minds as it did so many years ago, we’ll have a lot of exclusive items and a signing with the cast so be sure to stop by our booth or stay tuned to the site for all the latest news! 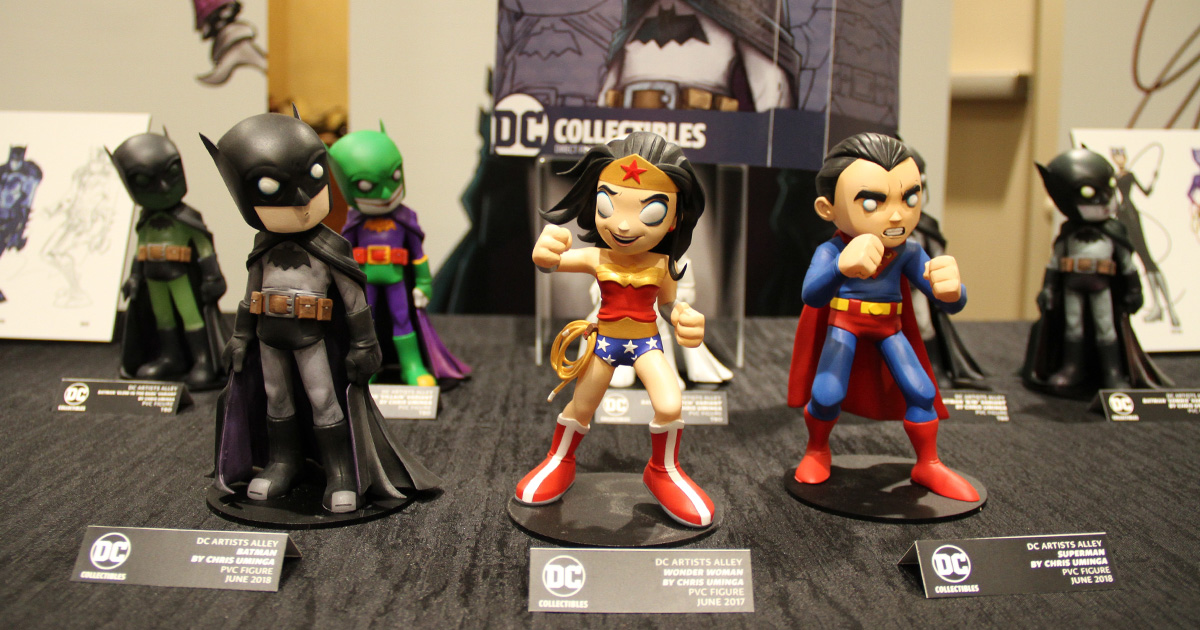 SDCC isn’t just about T.V. shows, movies, and comics – toys and collectibles are everywhere. WWE and Mattel debuted a set of beautiful Superstar Dolls featuring the ladies of the Women’s Division. It’s been a Women’s Revolution within the WWE and it’s evident with the detail taken on these dolls of Charlotte Flair and the boss Sasha Banks.

DC Collectibles may have stolen Preview Night with some of the more outstanding collectibles so far. The all new Artists Alley vinyl figure line will feature stylized versions of classic characters Batman, Superman and Wonder Woman by Chris Uminga. While we already have the Batman and Superman figures for pre-order on our site, we got a close look at the new Wonder Woman figure and it looks amazing. Sculpted by Joe Menna it stands 6 3/4-inches tall.

Also featured, was the Nooligan Statues. We’ve got the Joker and Harley Quinn statues available on our site to pre-order now, but the Batman statue looks incredible and be on the lookout for variants of these Artists Alley statues coming soon!

A new Bat-Signal 1:1 Scale Prop Replica was also on display with functioning light and interchangeable Bat-Symbols to signal any version of Batman you wish. One of the more breathtaking statues on display was the Babs Tarr Harley Quinn figure. The figure stands 7-inches tall and is made of poly resin.

The results are in and our top exclusives for Preview Night are the Twin Peaks Agent Cooper Bobble Head, Jakks Pacific Super Mario Bros. Mini Figures, Bif Bang Pow! Starship Enterprise Monitor Mate, and Twin Peaks Sign Monitor Mate. We are definitely excited about the strong turnout on Preview Night, which was up from last year, and we are expecting even better in the next four days.

With that, we end our coverage of Preview Night but stay tuned for the latest convention exclusive news.