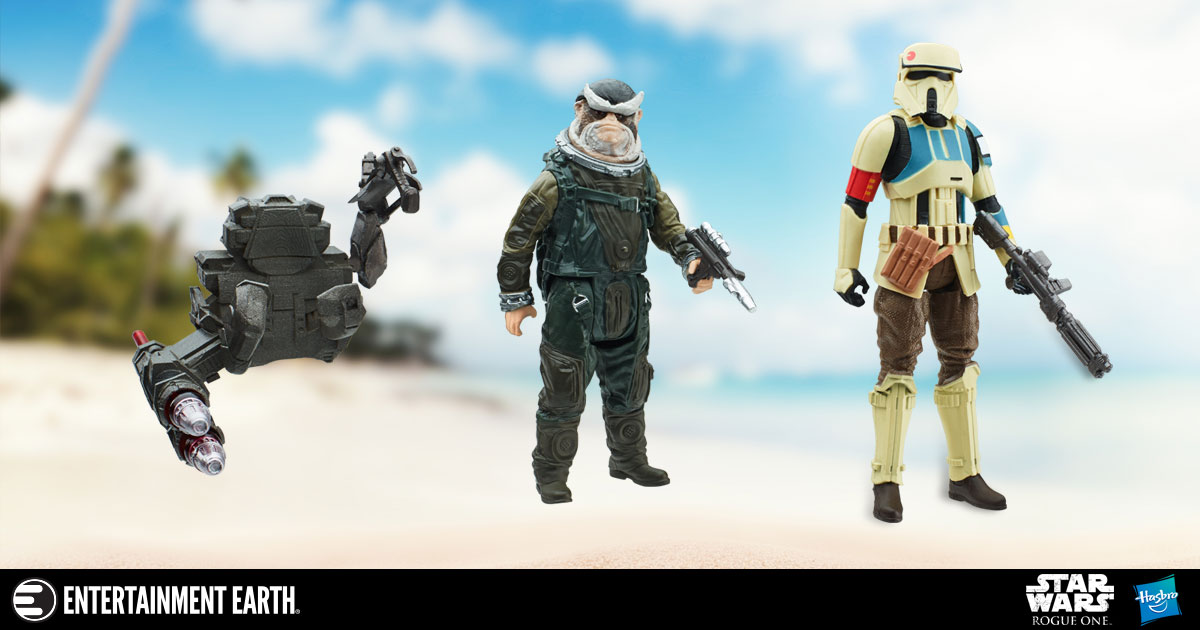 It’s a Star Wars tradition. Each movie set during the Imperial Era introduces some super-cool variation on the stormtrooper.

Star Wars: The Empire Strikes Back showed snowtroopers blasting at – and, in true stormtrooper fashion, missing – the Millennium Falcon as it escaped.

And in Star Wars: Return of the Jedi, we watched Luke, Leia, and various Ewoks get the best of Imperial biker scouts.

How To Spot a Shoretrooper Captain

Rogue One: A Star Wars Story revealed, even more, variety in the Empire’s ranks. It introduced coastal defender stormtroopers, or “shoretroopers.” Shoretroopers patrol beaches and landing pads on Scarif, defending the Citadel and the technological secrets it holds.

The slate blue paint on the chest plates and left arm of the shoretrooper in this Rogue One action figure two-pack identify him or her as a captain. Like the armor worn by ordinary troopers and squad leaders on Scarif, this captain’s suit is sand-colored overall, broken up by a crimson segment above the right elbow. (According to Star Wars: Rogue One: The Ultimate Visual Guide, shoretrooper armor varies based on place of deployment – so if you’ve seen one shoretrooper, you haven’t necessarily seen them all.)

While you’d never mistake a shoretrooper for anyone but a member of the Empire’s enforcers, their armor differs in notable ways from that worn by standard stormtroopers. Their helmets, for instance, lack the “sunglasses” look of the polarized lenses, and sport a snout-like front instead of a slim, triangular “mouth.” Helmet air filters are covered because, even in a Galaxy Far, Far Away, sand has a way of getting into everything.

And since shoretroopers must wade in the water at a moment’s notice, they wear less plating on their legs. No wonder rank-and-file “bucketheads” defer to these tropical setting specialists in battle.

Get the Only Shoretrooper Captain Action Figure While You Can

As all Star Wars fans know, no armor variant is a match for the power of freedom and hope. But points to Imperial designers for trying, right?

As Solo: A Star Wars Story and other anthology films that take place between the fall of the Republic and the Battle of Endor head our way, I’ll bet good credits we’ll see even more variations on the iconic stormtrooper suit – many of which will become iconic themselves.

For now, if you want to add a shoretrooper captain action figure to your troop-building efforts, this Star Wars Rogue One Shoretrooper and Bistan Action Figures two-pack is the only way you can do it. (And you get Bistan, everyone’s favorite “space monkey,” at the same time!) These fully articulated 3 3/4-inch figures come with two rifles and a rocket launcher backpack with two projectiles (take that, Boba Fett).

Bring the rest of your stormtrooper figures in line with their colorful C.O. Order your Shoretrooper and Bistan two-pack today!

What’s your favorite kind of stormtrooper armor, and why? Suit up and sound off in the comment section below!