In every generation, there is a chosen one. She alone shall stand against the vampires, demons, and forces of darkness. She is the Slayer. From Joss Whedon’s popular Buffy the Vampire Slayer television series come these amazing Buffy the Vampire Slayer Pop Vinyl Figures! Each figure measures 3 3/4 inches tall and are rendered in Funko’s wonderful Pop! style. Complete your Buffy collection with these Buffy Pop! Vinyl Figures. Get the set with Buffy Summers, Spike, Angel, Willow, Oz, and The Gentleman. Keep an eye out because your Spike might just be a variant inserted into the production run!

Buffy the Vampire Slayer chronicled the story of teenage vampire slayer Buffy Summers and ran on television from 1997 to 2003. Sarah Michelle Geller starred as Buffy Summers, with Alyson Hannigan as Willow Rosenberg, James Marsters as Spike, David Boreanaz as Angel, and Seth Green as Oz.

The Buffy the Vampire Slayer Pop! Vinyls are currently available for pre-order and scheduled to arrive in September 2014. 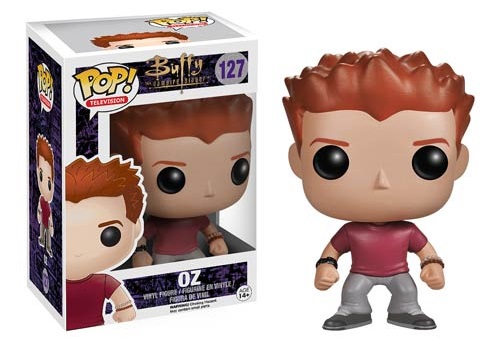