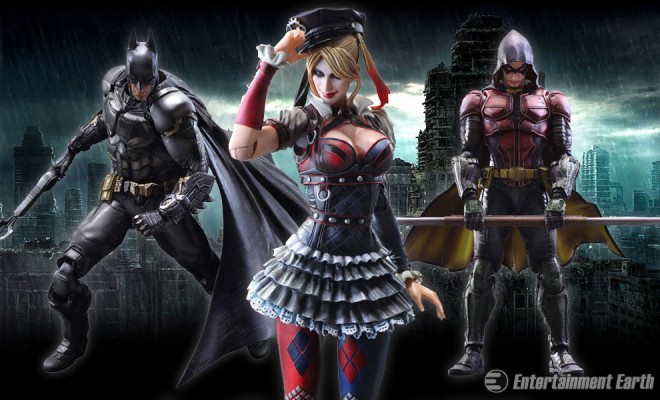 If looks could kill, Harley Quinn would fit the bill, but are Batman and Robin enough to beat her? Put them to the test with Square Enix’s brand-new Batman: Arkham Knight Harley Quinn and Robin Play Arts Kai Action Figures!

Harley Quinn is the character you know and love, even for all her craziness. With a ruffled skirt, corset, tights, and pigtails, all in the color scheme of red and blue, she’s exactly as you like her!

This highly articulated figure measures 10-inches tall and comes with several accessories including: an interchangeable head, hair pieces, a gun, a bat, and the police hat she wears in one of her most memorable in-game scenes.

Harley better watch out, though, because here comes Batman and Tim Drake as Robin! Batman wears his black Batsuit and Robin, in his hooded red and yellow getup, they’re ready to take down the bad guys.

All three figures come with stunning detail, a display stand, and are packaged in a window box.

The Batman: Arkham Knight Play Arts Kai figures are currently available for pre-order at Entertainment Earth, with Harley Quinn expected to arrive in August 2015 and Batman and Robin in July 2015. They also come with free shipping.