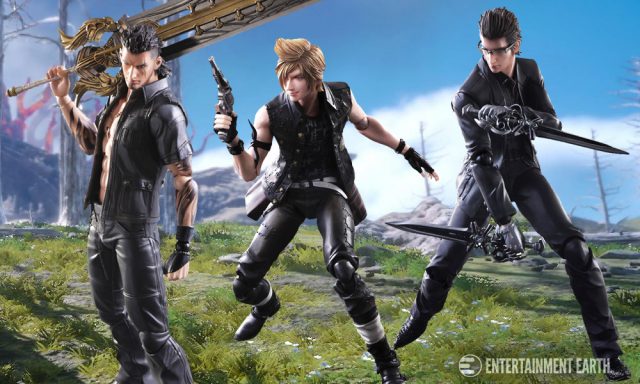 Almost ten years in the making, Square Enix officially announced the release date for Final Fantasy XV as September 30, 2016. To fans of the series it will be no surprise that the release of Final Fantasy XV Play Arts Kai figures will follow hot on the heels of the game itself!

The Final Fantasy Play Arts Kai figures are produced by Square Enix, and they are fully poseable action figures created with incredible detail and fidelity to the in-game characters. Galdiolus has his intricate tattoos over his arms and body, Ignis has his unique leopard skin print shirt, and Prompto’s layered outfit is replicated right down to the stitching and belt buckle! Each action figure also comes with interchangeable hand parts and a display stand, so you can get creative with how you pose them in your own collection.

We currently have Ignis, Prompto, and Gladiolus available for pre-order at Entertainment Earth, with free shipping included. Get in today to secure yours before they release in November!