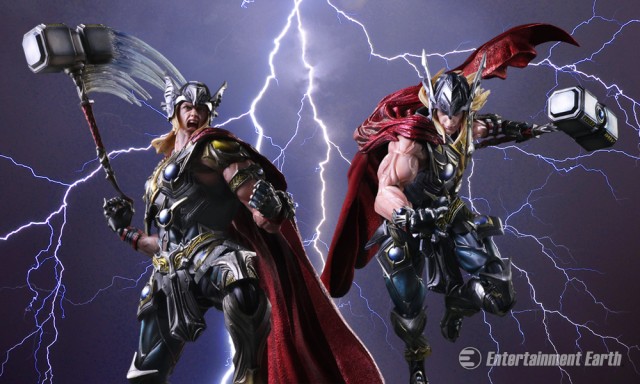 By the power of Odin, we declare this Marvel Universe Thor Variant Play Arts Kai Action Figure from Square Enix to be totally epic!

As heir to the King of the Gods, this figure has captured every detail of Thor’s godly appearance.

You will be amazed as you take in this great piece, from his rippling muscles to his ornamental armor which has been accentuated by careful paintwork. He wears his familiar helmet and his red cape ripples out behind him.

Mjolnir, the mighty hammer that only those who are worthy can wield, has been exaggerated in its size to convey the sense of power imbued in this iconic Asgardian weapon.

The variant figure can be posed in several different ways and comes with many accessories, including interchangeable hands, face, lightning, and an effect to show the swing of his hammer.

He stands 11-inches tall and comes with a clear display stand.