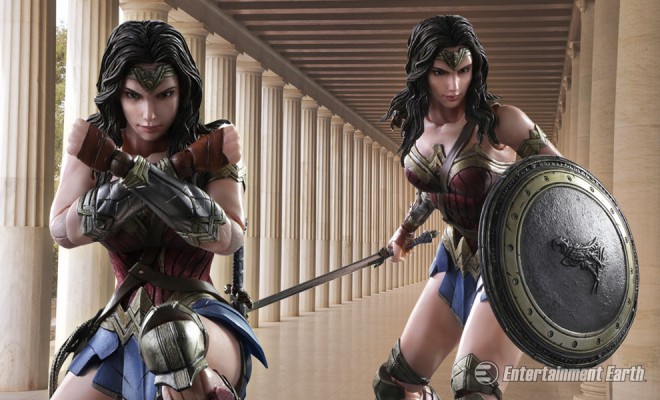 Though she escaped getting top billing, Wonder Woman can easily stand toe-to-toe with the two brawling boys in Batman v Superman: The Dawn of Justice. Equipped with an insane amount of endurance, the ability to nearly fly with massive jumps, more martial arts skill than Jackie Chan, and, of course, her magical lasso, Wonder Woman is sure to be the real headline of the newly formed DC Comics cinematic universe.

You can capture all the flair, sexiness, and action of the most badass female superhero with this Batman v Superman Wonder Woman Play Arts Kai Action Figure by Square-Enix.

Standing nearly 10-inches tall, this action figure is posable beyond possible. Her hair and skirt are made of durable and flexible material giving it endless positioning and realistic movement, as if captured in a single moment of action. Her interchangeable hands are perfect for holding not only her magic lasso, but her sword and circular shield. Her costume is digitally matched to the costume that she wears in The Dawn of Justice. Her face is delicately painted to accentuate her features.

This is the first big-screen appearance of the Amazonian Princess, but not the last! She will headline her own movie soon, making her the first female superhero to do so in the modern era of superhero films. There is no superhero—male or female—who is quite as exciting, powerful, and nimble as she. This figure will highlight any collection. Pre-order yours today at Entertainment Earth!