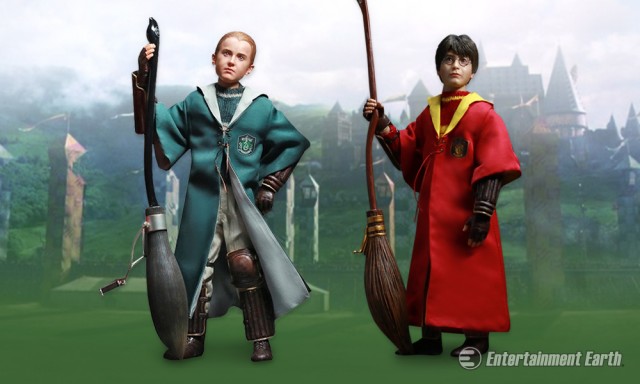 It’s Gryffindor vs. Slytherin with Star Ace’s Harry Potter and the Chamber of Secrets Quidditch 1:6 scale action figures, featuring none other than the Boy Who Lived and his rival, Draco Malfoy!

Based on the second film’s conflict between Harry and Draco on the Quidditch pitch, these detailed and life-like figures will be great additions to a Harry Potter collection.

Donning scarlet and gold and green and silver, each boy comes with fabric robes and great expressions, modeled after actors Daniel Radcliffe and Tom Felton.

Draco’s dad, Lucius Malfoy, may have bought the entire Slytherin team new brooms, but Harry’s Nimbus 2000 is nothing to sneer at! And he proves it on the pitch, racing to catch the Golden Snitch before Draco.

Each figure comes with a multi-position stand and green grass pattern base, but if you get the 2-pack, you’ll get exclusive accessories like the Quaffle, a Bludger, and a Beater bat!

Available with free shipping at Entertainment Earth, these fast-flying figures are expected to arrive in March.