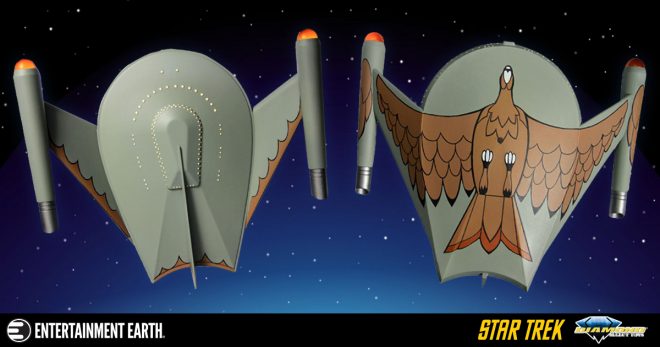 The newest entry in Diamond Select’s long-running line of “Starship Legends” is a Romulan Bird of Prey – but not just any Bird of Prey!

It’s the very vessel that covertly crossed the Neutral Zone in 2267 to destroy three Earth outposts. It’s the craft that Decius, one of its crew, called “the Praetor’s finest and proudest flagship.”

Of course, that status couldn’t keep it from being bested by Starfleet’s flagship, the U.S.S. Enterprise, under the command of Captain James T. Kirk!

Meeting the Romulans in “Balance of Terror”

In December 1967, the classic episode “Balance of Terror” (written by Paul Schneider, who also wrote “The Squire of Gothos” and the animated Trek episode “The Terratin Incident”) introduced Star Trek viewers to the Romulan Star Empire, one of the Federation’s oldest, most mysterious enemies. “Earth believes the Romulans to be warlike, cruel, treacherous,” Spock says at one point, “and only the Romulans know what they think of Earth.”

The episode takes us not only aboard a Romulan vessel but also into a Romulan’s mind. Mark Lenard (who would return to Trek on several occasions to play Spock’s father, Ambassador Sarek) plays an unnamed commander torn between duty and weariness from a life spent waging war. Anxious to get his ship and his soldiers safely home, he engages Kirk in a tactical contest that lead him to conclude that, “in a different reality,” he could have called his clever, courageous enemy a friend.

“Balance of Terror” is one of the original series’ most engrossing hours: a suspenseful, psychological drama that immediately helped the Romulans gain ground in fans’ imaginations that they’ve never lost.

To celebrate the golden anniversary of this seminal Star Trek episode – and just in time to help build excitement for Star Trek: Discovery, which former showrunner and executive producer Bryan Fuller had said uses “Balance of Terror” as a “touchstone” for the new series’ story arc – Diamond Select’s electronic Romulan Bird of Prey recreates the “finest and proudest” but ill-fated vessel in faithful detail.

Measuring 9-inches long and boasting a 12-inch wingspan, the model sports the distinctive avian markings on its hull that give this class of craft its name. Every press of its tail “fin” makes the white hull and orange nacelle lights illuminate as a clip from the episode’s soundtrack plays. When one of several weapons bursts sounds, the red light in the forward plasma weapon also shines. When you hear the sounds of the Romulan bridge exploding, all the lights flash.

But most of the clips (a full 15 of them, by my count) come from Mark Lenard’s dialogue. The sound bites evoke the full range of Lenard’s memorable performance as Captain Kirk’s worthy Romulan adversary – his military decisiveness, his noble bearing, his deep sadness at the waste of war.

If you want to display your Bird of Prey with steadily burning lights and constant sound (ambient bridge noise from the original series), press and hold the fin for 3 seconds. Another push turns off the sound; a final push turns off the lights.

The original Bird of Prey is the first Romulan entry in the “Starship Legends” line. It’s a beautiful piece, with an impressive array of sound and light features guaranteed to please any fan of Star Trek in general or the Romulans in particular! Don’t miss your chance to add “the Praetor’s finest and proudest” to your fleet of collectible starships today!

We’d like to know: Which appearance of the Romulans in Star Trek (any series or movie) is your favorite? Tell us in the comments below!