What Does the Black Series Darth Vader and Diorama Have in Common with Rogue One: A Star Wars Story?

Everything old is new again. Separated by nearly 40 years, Darth Vader looks nearly identical in Rogue One: A Star Wars Story as he did in the original Star Wars: A New Hope film. The original design was so forward thinking and iconic that it still holds up today. While there were minor changes to Vader’s look throughout the original trilogy and his short appearance in Star Wars: Revenge of the Sith, it was the classic 1977 feel that Disney aimed for in Rogue One.

Now you can bring the classic-looking Vader home with this Star Wars The Black Series 40th Anniversary Display Diorama with Darth Vader 6-Inch Action Figure Legacy Pack. Like its Rogue One onscreen counterpart, this Vader is recognizably vintage but with a few minor tweaks to make it shiny and new. This is not just a repack of the other The Black Series Vader, this figure has excellent new molds, especially the update to Vader’s helmet – with a sleeker sculpt and red lenses. But, the amazing Vader figure is just part of the package.

This figure also comes with a modular display stand and reversible backdrop, so you can see Vader in a variety of settings. That’s not all, included are pegs to stand up to twelve 6-inch action figures in front of the backdrop.

This amazing legacy pack will bring all the action home. Pre-order yours today at Entertainment Earth! 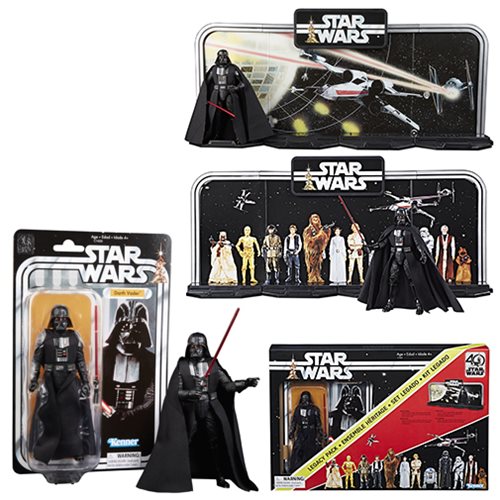 Action Figures Collectibles
Related ItemsAction FigureDarth VaderHasbroRogue OneRogue One: A Star Wars StoryStar WarsStar Wars: A New HopeThe Black SeriesVintage
← Previous Story Today, You Will Be Testing with a Partner. This Portal 2 ATLAS Figma Figure Brings the Action.
Next Story → Huge Marvel vs. Capcom Statues Take on All Challengers. Which Fighter Would You Choose?