Monsters in Your Toy Box: 7 Must Have Star Wars Creature Toys

Since 1978, Star Wars toys have been on every child’s list of must have’s at Christmas time, birthdays, and every single other holiday in which you could potentially get a present. One of the more creative areas for George Lucas and his imaginative team over the years has been the creatures of the Star Wars universe and they’ve inspired some pretty great, and sometimes ridiculous, toys as well. Let’s get a look at some of the creatures and their toy clones!

Although this creature was never fully seen in the film, it was the first Star Wars creature toy released. Who would have thought the beast that called a trash compactor its home was bright green with fin-like limbs and a huge goofy mouth at the front?

More of a set dressing than anything, the Dewback can briefly be seen in the original edition of Star Wars, but that didn’t stop Kenner from making it a toy (Lucas would later add addition Dewbacks into the film when he re-released it).

The Yeti-like beast that took Luke as its meal on the ice planet Hoth. This toy could hold a figure in its paws and also featured spring action arms that would throw a punch at any would be human victim or Tauntaun that may be crossing its path. Speaking of…

These adorable and ridable creatures from Hoth were a handy mode of transportation for a patrolling Rebel Alliance member on the go. They made a great noise and smelled awful (both inside and out). They toy gave you the chance to perch a figure on its back by using a trap door feature to push your figure through the toy and give it the appearance of riding it. The saddle made it look like the legs were on the outside, but they actually were standing inside the toy. The second version of the Tauntaun toy released came with an open stomach feature so you could have your Han Solo figure shove your Luke Skywalker Figure inside to keep warm. 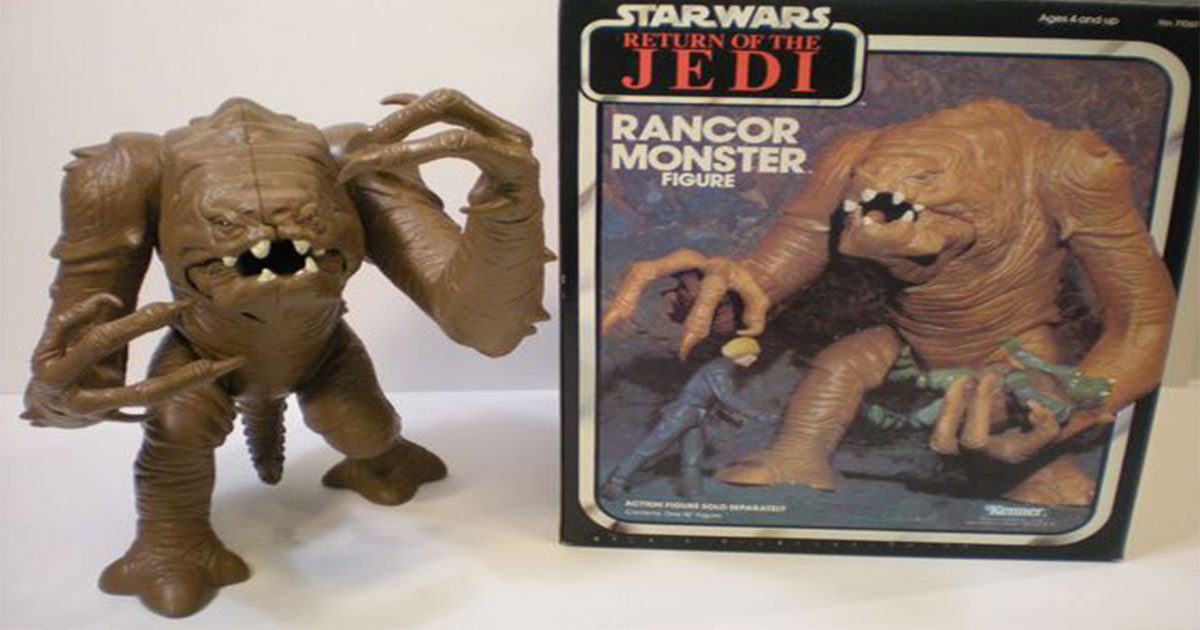 The giant monster that killed for Jabba’s pleasure beneath his palace. The Rancor was a collector’s dream (or a child’s nightmare) to get their hands on when it was first released in 1984 with Star Wars: Return of the Jedi. This giant beast gave the uber-Confident Jedi Luke Skywalker a run for his money. Luke prevailed, at the expense of a Gamorrean Guard, and the Rancor was defeated to the dismay of his weeping trainer. The toy itself had a trigger on the back that opened the massive jaw of the beast. The hands easily held a figure in it’s mighty grip as well!

Image: Branded in the 80s

You were either young enough to love these guys or too old and were annoyed with them and their inclusion in the Star Wars lore. Love them or hate them, they helped defeat the Empire (and showed off some rather vicious celebratory activity). They also made great stocking stuffers as toys and plush dolls. They’re essentially walking, talking cuddly teddy bears that live on the forest moon of Endor in tree houses. They love a good BBQ and stories told to them by golden robots. They have enough to taste to fall in love with Leia, so they can’t be all that bad.

If you haven’t been touched by the adorableness of a Porg, you may have just woken from a coma or just recently discovered the internet. Since making their debut in the behind scenes featurette of Star Wars: The Last Jedi at San Diego Comic Con, the Porgs have been an internet sensation! Much like the Ewoks you either love them or hate them. While there haven’t been toys released yet, you know it’s coming. Like BB-8 before them, these cute little space puffins will steal the hearts of children and money from parents’ wallets!

This is just a small sample of the millions of creatures in the Star Wars films, novels, games, and comics.

What creature toys were/are your favorites? What did we leave out from this list that you have proudly displayed in your collections? Let us know in the comments!