Just in case you were in denial about Star Wars Episode VII being real, here’s the proof that it is: it wrapped and officially has a title.

Abrams, a long-time Star Wars fan, showed his gratitude to the cast and crew with a heartfelt thank you card, signed by he and producers Kathleen Kennedy and Bryan Burke. Anthony Quintano tweeted the card via James Rose on November 3rd. The card reads:

To the Extraordinary Cast and Crew of Episode VII: 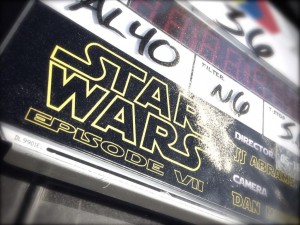 It is a true honor and absolute joy to come to set every day and work alongside each of you. Your professionalism, passion and patience is more deeply appreciated than we could ever express. From the deserts of Abu Dhabi, to the Forest of Dean, to the stages of Pinewood, you have risen to every challenge and been as wonderfully kind as you are brilliantly talented. Our ambition here is large, of course, and it must be: we are here to make a film that entertains millions of people, of all ages, for generations. To create an experience people will cherish watching as much as we will cherish having made it, together. How lovely it would be if you had, in addition to your name on the screen, some actual real tangible proof that you were part of it! Here, then, is that proof. Wear it well, wear it healthily, wear it proudly. But, mostly, thank you.

A wrap party was held on November 1 for the film’s cast and crew at the Science Museum in London. The Original Trio themselves – Harrison Ford, Mark Hamill, and Carrie Fisher – attended the party alongside other cast members as well as Simon Pegg. This, of course, begs the question of whether the rumors are true that Simon Pegg will have a cameo in the film or if he was there to support J.J. Abrams, who he met while working on Star Trek.

John Boyega, starring in the upcoming film, also posted a photo of he and his new pal R2-D2 from the wrap party, which you can see below.

The world is a bit brighter now that you can walk around saying Star Wars Episode VII The Force Awakens a thousand times in your head, as you question everything you’ve ever known and loved about the Star Wars saga. 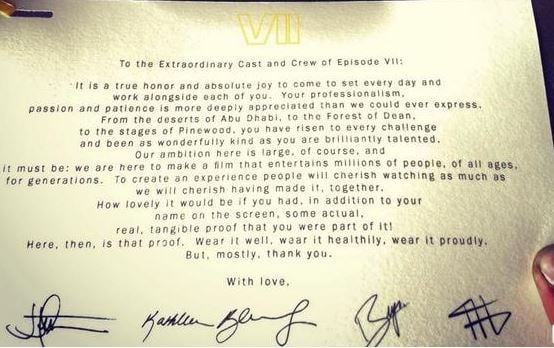