Ever since the holiday retail season of 1977, when Kenner Toys, caught off-guard by a demand for Star Wars action figures, sold empty, cardboard boxes decorated with artwork as “Early Bird Certificate Packages,” Star Wars and holiday gifts have gone together like sweet-sand cookies and blue milk, or droids and oil baths, or mynocks and space slugs’ stomachs.

My family celebrated Christmas, and my first memory of anything Star Wars under the tree was Kenner’s incredible “Death Star Space Station Playset.” It was a three-story triumph of molded plastic and illustrated cardboard that stood almost two feet tall and cost $19.99 (adjusted for inflation, that would be about $76 now). My best friend and I spent hours making our action figures commandeer its loudly rotating laser cannon, prowl its tractor beam catwalk (equipped, unlike the one in the film, with convenient pegs for our heroes’ feet), and bust out of its bright orange trash compactor (complete with foam “garbage” chunks and a plastic green dianoga). The gift was this six-year-old Star Wars fan’s idea of perfection.

This swift and lethal Imperial craft, especially designed for atmospheric combat, makes its debut in Rogue One: A Star Wars Story. Hasbro’s screen-accurate replica, compete with two launch-able Nerf missiles and a Striker Pilot action figure, is sure to be a hit with fans eager to re-enact the movie’s fast-paced spacecraft battle sequences in the comfort of their own homes.

Because nothing quite captures holiday magic like the wholesale slaughter of the galaxy’s guardians of peace and justice! In all seriousness, these expertly detailed 6-inch figures (the first ever figures of that size based on Revenge of the Sith troopers) exemplify the Black Series’ commitment to quality, and are guaranteed to thrill any Star Wars fan on your gift-giving list.

The little astromech droid from Star Wars: The Force Awakens beeped, whistled and rolled his way into moviegoers’ hearts last year. Now, he’s yours to control using your smartphone or tablet. Whether you’re guiding him via voice commands through a maze of guests at your holiday party, setting him to patrol the edges of a sweets-laden tabletop on his own, or using him to record “holographic” season’s greetings, you’ll be amazed at how Sphero has brought BB-8 right off the movie screen into real life. 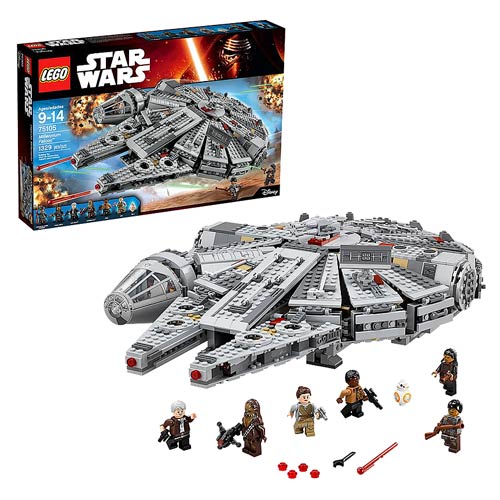 She’s more than 90 years old by the time of The Force Awakens, but the Millennium Falcon is still, and likely always will be, “the fastest hunk of junk in the galaxy!” Han Solo once told Luke Skywalker the ship “may not look like much,” but we think LEGO’s 1300+ piece take on the Kessel Run record-busting freighter is a beauty. Features include a detachable cockpit that seats 2 LEGO minifigures (the ship comes with 6 of them, plus a BB-8), dual spring-loaded shooters with ammo, and a secret compartment (perfect for smuggling holiday loot). Star Wars fans and LEGO enthusiasts alike will enjoy snapping together and playing with this version of, arguably, the coolest ship in all sci-fi.

Young filmmaker George Lucas found tremendous inspiration in Japanese director Akira Kurosawa’s work, including the classic 1954 film Seven Samurai. With this Samurai Stormtrooper, then, “the circle is complete” (to swipe a phrase from Darth Vader). Standing 7 inches tall, this taiko yaku is responsible for beating a drum and blowing a conch shell in order to set the pace for marching soldiers and to help them maintain ranks as they follow their flag (here, bearing the familiar Imperial “gear” icon) into battle. This figure is Tamashii Nations’ impressive tribute to both a major influence on and the continuing influence of Star Wars.

Smartphones may be muscling in on wristwatches’ territory among millennials and members of Generation Z, but this is one old-school timepiece that’s striking back! Forget Mickey Mouse’s big and little hands! When you see the big TIE fighter here and the little one here as they orbit the Empire’s dreaded Death Star, you’ll know exactly what time it is: Time to let your fear make you fall in line, along with all the local systems. This wristwatch is now the ultimate power in the universe—I suggest you use it!

Ahem. Sorry. Just the stress of the holiday season talking…

Think of the classic holiday trios: The magi with their gold, frankincense, and myrrh… the Ghosts of Christmas Past, Present, and Yet-to-Come… and Luke, Oola, and the Rancor! Okay, they may not be staples of holiday pageants or greeting cards (yet), but they make fantastic Pop! Vinyl Figure Bobble Heads! And, in the spirit of the season, you could even display them doing something festive together, like baking cookies or caroling through the snow. You can always restage Return of the Jedi’s violent sequences involving these characters later, in January, when your tax forms arrive. 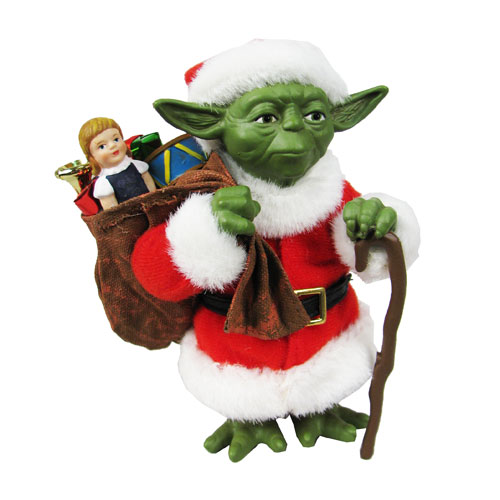 Making his list, he is, and checking it twice. Find out, he will, who is of the dark side, and who is of the light. That’s right, friends: Master Yoda is coming to town, straight from Lucasfilm’s famed 1981 Christmas card. This 5-inch high display piece depicts Yoda cosplaying as jolly old Saint Nicholas, his sack stuffed with toys for all good younglings. So set a hot bowl of rootleaf stew on your hearth, because one thing’s for certain: If Yoda can get Luke’s X-wing out of a swamp, getting himself up and down your chimney is not going to be a problem!

Princess Leia entrusted R2-D2 with a message for Ben Kenobi and the technical plans to the first Death Star. You can be more than confident, then, entrusting him with your loose change! Besides, he’s actually big enough (approximately 6 inches long and 5-⅗ inches tall) to hold a little bit more. Best of all: no restraining bolt, meaning this astromech’s ready to release your valuables whenever you want them!

We told you when we reviewed “Imperial Super Commandos”: Some people just can’t get enough of the Mandalorians! If there’s a “Mando” fan on your holiday list, or if you’re one yourself, you’ll want to sip your pumpkin spice latte, hot chocolate, eggnog, or other seasonally appropriate beverage from this 20-ounce ceramic stein, emblazoned with the Mandalorian “Krybes” symbol and painted in the color scheme of Boba Fett’s armor—colors that are, incidentally, muted shades of Christmas red and green! This stein is limited to 816 hand-numbered pieces, and is available exclusively through Entertainment Earth.

If you’ve made it to the end of this list and still haven’t found the holiday presents you’re looking for, be sure to scout our Star Wars online shop. We’re confident we have something that will bring Star Wars’ signature blend of action and fun into everyone’s celebratory season!

What are your top Star Wars gift-giving (or gift-receiving) ideas? Let’s compare wish lists in the comments below!