Saturday morning at Star Wars Celebration erupted over one thing: Star Wars Rebels. At the panel, we not only got to see the trailer for Season 2 (watch below) and surprise guests, but we also learned some fun things about the show and cast!

It was a fun panel, with the cast joking around with each other. Prinze, Jr. explained the process of making the show. The cast travels from Los Angeles to San Francisco in a van together and then records the new episodes together. The ‘found family’ they play on the show translates to real life as well.

While Prinze, Jr. and Marshall are known Star Wars fans, the rest of the cast gushed about how they’ve become bigger fans since working on the show.

In talking about her own evolution as a fan, Sircar said something that resonated with the audience and was apt for Celebration: “You know what’s great about Star Wars? You can come any time and be a fan.”

Filoni then treated the audience to something very special – the three and a half minute trailer for Season 2. The cast quickly scrambled out of their seats to sit on the stage and watch the trailer with the audience.

The biggest moments of the trailer include Ahsoka (Ashley Eckstein) tagging along with our crew, as well as the return of Captain Rex (Dee Bradley Baker)! The audience erupted with joy at the sight of the Clone Trooper, now confirmed alive but much older.

While returning characters are exciting, the show does revolve around our main cast, so seeing Kanan and Ezra face off against Darth Vader at the end of the trailer was thrilling.

If the trailer wasn’t enough to get the audience excited, Eckstein and Baker took the stage after the trailer to thunderous cheers.

After all this, one fan asked Filoni the question on everyone’s mind: will we see an Ahsoka versus Vader face-off? Filoni, evasive as ever (Prinze, Jr. even called him a Sith Lord over this earlier), didn’t say much about any specific Season 2 content, but he did tell the audience that he spoke to George Lucas about this and they agreed “it’s a story we have to tell.” 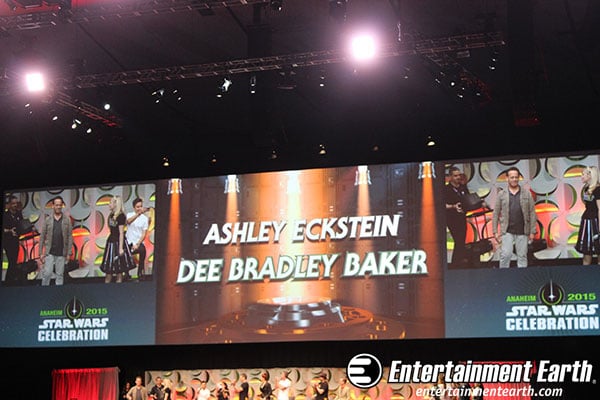 I would say that’s a pretty big hint we’ll be getting an awesome Season 2.

At the press conference following the panel (which consisted of the same panelists save for Eckstein and Baker), Filoni confirmed that Vader will be voiced by none other than James Earl Jones!

The cast and crew were also asked, unsurprisingly, about Sarah Michelle Gellar’s involvement in Season 2. Prinze, Jr. jokingly replied: “Oh, you mean my wife? She played the Wookie in Season 1!” So we’re still not any further on that front but fans continue to speculate that she will play the female Inquisitor seen in the trailer.

Ultimately, the stars of Star Wars Rebels described Season 2 as the characters growing individually while staying together as a family. Could this mean more back story? We’ll have to stay tuned and find out!

Are you excited for Season 2 of Star Wars Rebels? If you were at Celebration, what was your favorite part of the panel? Let us know in the comments!

All photos taken by Anastasia Crittenton at Star Wars Celebration 2015.